My contribution to the year-end review potluck 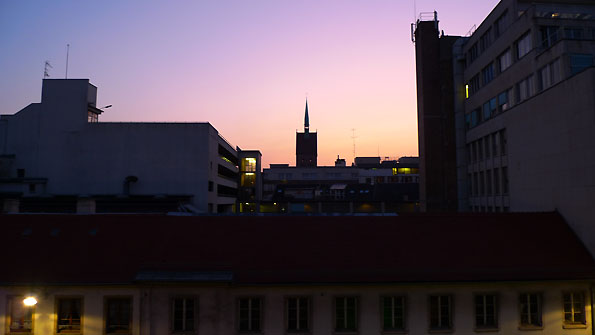 December is always a weird time a year. It’s a month where the western world tries to grind to a halt and finally stops for about one week. Around this time, people start posting notes on Facebook that dissect the last year in their personal lives. And this year, news sites are filled with retrospectives on the news, people, fashion, pop culture and technology that defined the decade.

I read a particularly astute Facebook update in which the poster likened 2009 to a boorish house guest that overstayed his welcome. It made me think about how I felt and how I would remember this year. Truthfully, I am always glad when a year is over. December is a month of expectation and anticipation and I am always relieved to put it behind me. I am always more capable of making plans and looking forward when I am safely on the other side of the calendar instead of counting down.

That being said, 2009 feels like three different lives bound together loosely by the last four digits of my digital camera’s date stamp. From January to the end of April, I was in Toronto finishing my last semester at Ryerson. My last year of Ryerson was by far the most emotionally trying of the four years. I had to come down from the high of going on exchange, a summer of backpacking and settling back into routine existence. It felt like all the fun parts of university were over. It was the longest I had lived with my parents since I started university and I was not a happy camper.

Making meaningful summer plans are always a source of anxiety, especially in journalism school. If you want a good internship, you need to start applying in December. So what to do when you know you’re leaving in September to do something completely unrelated? Keep your head down, suck it up and take a retail job while you wait to leave? It was a worry I had since I returned to Toronto in September 2008. You don’t want to find yourself among those scouring the “writing/editing” section of Craiglist in May. It was more pressure this year since we were graduating and it was now possible (nay, mandatory) to search for a full-time job. Through a miraculous stroke of luck, I managed to avoid all this. In January I got an email telling me I received a scholarship to study Mandarin in Taipei. In hindsight, I chose to treat this like a free pass to sit back and suffer the rest of the school year until I could get the dodge out of there.

Taiwan was a completely unexpected stop in 2009. I can say now, without a doubt, that it was the best part. Before going there I only knew about its existence and never given the country a passing thought. There was also something amazing about revisiting the Chinese language. Learning Mandarin came so naturally, I astounded myself everyday. Lessons in the textbook would spill out of my mouth without having to put in study time. It was always full-steam ahead. Of course it’s much easier to like something when you are good at it. I left with a different attitude about Chinese language and culture and I have to credit Taiwan for a lot of that.

Which brings me to the here and now in France. This is the part I hate the most about these year-end lists–self-eulogizing while you’re still living. Increasingly I’ve been finding it hard to say positive things about my experience here. Until now, I have been fortunate and sheltered in my experiences abroad to avoid some of the normal feelings of living abroad, namely loneliness and isolation. It sounds obvious but the biggest adjustment was realizing that when you’re no longer a foreign student, you don’t have a ton of other foreign students always ready to hang out with you. When you are at a place where you can speak the language, however badly, you now have the option of trying to mix with the locals (and a nagging feeling that you should, instead of befriending other foreigners.) This has been proved harder and more intimidating than I thought. Being a new kid in a French workplace isn’t easy either. It has not only been getting used to the French way of doing things with my colleagues but also becoming a cog in a school system I didn’t grow up with.

In the past two years, I’ve begun to measure time in countries or associate periods of my life with a place. I remember Utrecht and Taipei as such beautiful and happy times in my life. However, they were instant gratification. Toronto is a mix of social circles from different periods in my life that I could fall back into, which makes things both mundane but comfortingly easy. The worst part for me so far is the disappointment that I don’t love France yet. I really hoped and expected that I would.

Lately I’ve been thinking that France serves another purpose in the greater scheme of things. There wasn’t much difficulty or responsibility in Utrecht or Taipei, so I rarely had feelings of dissatisfaction. Here, for the first time, I have to try and work at building a life and finding a niche for myself. Needless to say, I’m not there yet. The catch is my contract finishes in four months anyway. I don’t believe in being defeatist and resigning myself to waiting until I can pack up and leave. I’ve done that before (see: the paragraph about how I spent the first third of 2009) and it didn’t make things any better. So I think I have my new year’s resolution and the first part of 2010 cut out for me.