Boomers are the latest cash crop 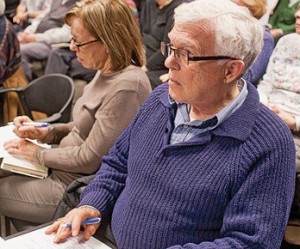 When David Prosser, 64, graduated from Ryerson University in June of last year, it was his third time there in a cap-and-gown ceremony. In 2005, after ending a lifelong career at Kodak Canada, he enrolled to train as a fundraising manager at Ryerson’s G. Raymond Chang School of Continuing Education, and now works as a development director for a Toronto-based mental health charity. “It was a big change to get from the corporate world to the non-profit,” he says—but his alma mater was there to help.

Prosser is one of an increasing number of students who are trotting back to campus decades after their first graduation, and changing the face of universities across Canada. Mid-career and mature professionals going back to the books are fuelling a boom in adult education that goes well beyond colleges. At the Chang school, enrolment rose by 49 per cent since 2001; at the University of Toronto’s School of Continuing Studies (SCS), it’s up 75 per cent since 2007; at the University of Ottawa, it nearly doubled between 2000 and 2009, growing 28 per cent this academic year alone; and at McGill University, it grew by around 6.5 per cent since 2009-2010. When Simon Fraser University (SFU) advertised a free workshop called “Later in Life Career Transitions” around Christmas last year, the 70-spot event was fully booked before New Year’s, and when the school decided to make another 100 seats available, they sold out in a week. “I think it says a lot about the hunger for learning and career options later in life,” says SFU’s dean of lifelong learning Helen Wussow, who added that enrolment at the school was up this year.

Continuing education used to be predominantly the realm of public and private colleges, but universities are now diving into the sector. Many have been offering some continuing education classes for decades, but the recent eye-popping rates of growth reflect a conscious effort to step up those programs. “In the last four years we’ve created a new visual identity for the school and a new brand-awareness effort,” says Almira Mun, strategic marketing director at U of T’s SCS, adding that this included a facelift for course catalogues and publications, and more ads in local newspapers. In 2008, the U of O turned its adult education classes into a new Centre for Continuing Education, which offers both personal enrichment and professional development classes and is housed in a brand-new building with a view of the Parliament Buildings. SFU and McGill are both conducting market research to lay the foundations to expand their offerings for adult learners.

The increased demand for later-in-life schooling is coming from foreigners seeking a quick gateway to the Canadian workplace, mid-career professionals who want to update their skills and, especially, sprightly baby boomers looking for a new career after retirement or some stimulation to keep an aging mind in shape. But regardless of place and year of birth, when skilled workers look for a professional upgrade or intellectual pastime, they increasingly want to do so at the university level, says Serge Blais, director of U of O’s adult ed centre. The sector, he says, “is not just growing, it’s growing exponentially.”

And, along with enrolment, revenue is on the rise. At U of O, for example, it grew by 89 per cent between 2000 and 2009. Other schools declined to disclose financial information to Maclean’s. Yet, with young people’s full-time post-secondary enrolment expected to dip by nine per cent between 2012 and 2025 due to Canada’s aging population, catering to seasoned students looks like a good insurance policy.