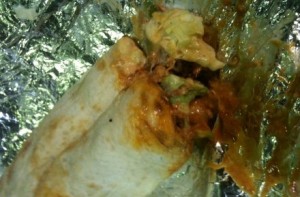 The 2013 Maclean’s University Rankings includes an examination of the dining on Canadian campuses. We found healthier options than ever, but also a new problem—high prices.

Maclean’s On Campus is continuing the conversation by having students review food on their campuses and showing what it costs to dine.

If you’re a student, you can help. Send us a review of an eatery at your university. Keep your receipts. If we publish it, we’ll reimburse you.

While spending a Saturday night at York catching up on homework, I was forced to grab a bite to eat so my stomach would stop growling and I could keep working. Considering it was late and on a weekend, there wasn’t much to choose from. As I ventured through York Lanes looking for something affordable and satisfying—besides Popeye’s—I decided to try Indian Flavour.

After studying the menu, I settled on a medium-spiced butter chicken tandoori wrap. The wrap was much larger than I expected, which I was happy about until I took a bite. For a place that’s called Indian Flavour, the food tasted unconvincingly Indian. The wrap was oozing with a tangy mayo-like sauce that was not the least bit spicy. The chicken was shredded into thin pieces creating a mushy Tuna-like texture. Sliced cucumber and limp lettuce were soggy from the sauce. The only upside was the naan bread. It was a nice alternative to the pitas usually used for wraps on campus. It held everything together, was a good thickness and was neither dry nor excessively oily tasting.

Overall, the wrap satisfied my hunger, but not my taste buds. Being Indian-Canadian, I’ve indulged in better butter chicken many times at home and at restaurants. There was nothing authentic about the flavour and the sauce created a mushy texture. At $9.00, this is not an option I’d choose again.