Two-wheel transport speeds ahead on campus 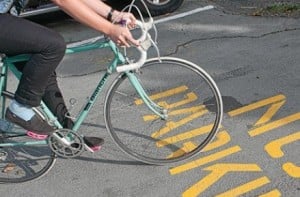 Cyclist at Dalhousie. By Andrew Tolson.

If you were to design the perfect bicycling environment, it would include safe, well-maintained and lit streets. It would have almost no car traffic, dedicated bike paths and ample secure parking and storage. It might even have showers purpose-built for sweaty commuters and a well-equipped repair shop where cyclists can get help fixing a flat tire. In short, it would look quite a bit like the campus of McMaster University.

McMaster is located in blue-collar, largely car-centric Hamilton, Ont.—an unlikely champion of the bicycle. But in the past two years, the city has been in the vanguard of sustainable travel, expanding cycling infrastructure, improving regional transit and adding carpooling programs. Municipal support has, in turn, emboldened the university, and encouraged both students and faculty to take up, in great numbers, alternative modes of transportation. According to Kate Whalen, manager of McMaster’s office of sustainability, a 2010 campus survey revealed that 37 per cent of students walked or cycled to school. “We have a very engaged population,” she says. And the university is very responsive to the needs of that population. Just one example: after a civil engineering student did a systematic geographic information survey of the use of university bike racks, underutilized racks were relocated to more optimal spots on campus. Ten additional racks are installed each year, Whalen says.

Biking has always been an if-you-build-it-they-will-come culture. It’s a no-brainer: the easier and more convenient it is to bike, the more likely people are to use their two-wheelers. And there are no better candidates for cycling than university students: largely able-bodied young people, with tight budgets and, usually, an awareness of the fitness and environmental benefits cycling offers. In recent years, students and faculty have been encouraged even more to ride to school—with universities struggling with the demands of their own growth. Congestion and parking have, meanwhile, become pressing concerns.

In 2008, a Transport Canada report highlighted five post-secondary institutions—McMaster, the University of Ottawa, McGill, the University of British Columbia, and the University of Victoria—and their respective, campus-based “Transportation Demand Management” initiatives. These initiatives all seek to reduce the number of students and university staff that take single-occupancy vehicles to school, offering alternatives from universal student transit passes, carpooling and, of course, improved cycling facilities.

Those five universities still offer the best cycling experiences in the country. Each boasts its own cycling co-op where students can rent or borrow bikes, get their bikes fixed, share ideas and work together to better life on campus for all cyclists. And each school adds new services or facilities almost every year. The University of Ottawa, for example, started a bike-share program in the spring of 2011. McGill has had such a program in place for almost a decade, but the newish BIXI system, operated by the City of Montreal, and with many hubs on campus, has expanded this fleet of bikes for rent. The school also aims, in the next year, to double the number of bike racks.

The University of Victoria and UBC have long been cycling pioneers. Obviously, the gentle B.C. climate is a major factor, but both schools have created, over the past decade, the most robust and comprehensive bike infrastructure in the country. At UVic, where the percentage of people travelling to and from campus by bike increased 67 per cent in the last four years, there are 3,000 parking spaces and 96 bike lockers. UBC’s bike co-op offers numerous repair and safety courses, including some specifically geared to women, and a nascent cargo bike-share program. The inclusivity and diversity of the programs, as well as the planning and design of Vancouver itself—there are no highways through the city, and all buses can carry bikes on their front racks—have all contributed to an increase in biking. Jean-François Caron, a graduate student in physics and a former president of the co-op, says, “Cycling is no longer a symbol of poverty or low status; it’s just something people do.”

And they’re doing it in increasing numbers on more surprising campuses as well. Students at the University of Calgary were delighted that their much beloved volunteer-run community bike shop, the Bike Root, found a new home this fall after its temporary campus location closed; the city’s progressive mayor, Naheed Nenshi, and his own new municipal bicycling strategy, have put more wind at their backs. Even at the University of Windsor, in a city where Fords are a far more common sight than Schwinns, a growing community of cyclists has made its presence felt.

“People are waking up to the fact that Windsor’s a great place to cycle,” says Christopher Waters, the associate dean at Windsor’s law school. “It’s flat, the climate’s mild relative to the rest of Canada, and we have a beautiful waterfront trail from one side of town to the foot of campus.” Waters, a member of the Windsor cycling committee, proudly makes a point of riding to school no matter the season or weather: “I, quite literally, did not miss a day last year.”

University of Ottawa: Parking doesn’t come cheap in the nation’s capital (or its university) but upgraded cycling amenities—including an effective theft-prevention program—and 500 km of bike lanes in the city are quickly reducing car use.