He uses props and technology - anything that makes physics fun 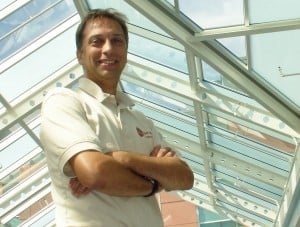 In 1986, to recognize the importance of university teaching, the Society for Teaching and Learning in Higher Education and 3M Canada created the 3M National Teaching Fellowships. Ten university faculty members are recognized each year for their educational leadership and exceptional contributions to teaching. Maclean’s On Campus is profiling all 10 of this year’s winners. This week, we look at Adam Sarty, a celebrated nuclear physicist and acting associate dean of science at Saint Mary’s University.

Taking Adam Sarty’s introductory physics course often requires dodging flying objects — whether it’s water from a container that he’s using to demonstrate centrifugal force, freezing balloons that show how volume is proportional to temperature, or sometimes even Sarty himself, who jumps off of desks to demonstrate that objects in free-fall are weightless. “I admire how far he goes to demonstrate physical principles,” says Alejandra Vera Monge, a fine art student who says she understands basic physics because of her energetic prof.

Sarty credits his high school physics teacher for teaching him that physical demonstrations and a bit of showmanship will keep people coming to class. That teacher, Norman Stonehouse, would do “crazy things” in class that helped him grasp the basics, he says. “Stonehouse was a dynamic and energetic individual — one of the coaches of the wrestling team — and he brought that energy to physics class,” says Sarty. “He broke bricks with his hand to teach about momentum, he laid on a bed of nails and had us walk on him to teach about pressure. I try to emulate that as much as I can.”

To engage students even more, Sarty gives them electronic clickers and asks them to reason out what might happen during his demonstrations. “By getting them to commit to a specific answer using the clickers, students become quite interested to see if they got it right — and then interested to find out why they were wrong or the formal proof of why they were right,” he explains. Although clickers may be considered the latest technology for some professors, Sarty was already using them 10 years ago, when most of his current students were still in first grade.

But it would be a mistake to think that Sarty’s emphasis on physical displays of principles means students with other learning styles miss out. “I ensure that my lectures are lively and animated for those who learn by hearing,” he says. “I use PowerPoint in combination with writing on the big screen for those who learn by reading and writing,” he adds. “And I’ve led the development of a library of demonstrations [that are] video-taped and posted on the web so they can be accessed by students after class.” In fact, they can be accessed by anyone with an internet connection, right here.

Putting his lectures online, for free, is typical Sarty. He believes it’s important that everyone gets a chance to understand the basics of the physical world, he says. “For 95% of the students in these courses, it’s their last chance to formally learn about physics,” he says of his introductory courses. “I believe that a solid appreciation of the basic physical principles is a powerful tool in preparing students to be informed participants when decisions on difficult issues will face them in their future, such as climate change, energy use and energy generation alternatives.”

But his “physics is for everyone” mantra doesn’t stop there. Despite an impressive list of research projects to oversee — Sarty has been awarded more than $1.5-million of funding during his career — he still makes time to offer his Physics is Phun presentations to high school classes, daycares and community groups.