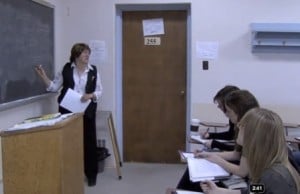 In 1986, to recognize the importance of university teaching, the Society for Teaching and Learning in Higher Education and 3M Canada created the 3M National Teaching Fellowships. Ten university faculty members are recognized each year for their educational leadership and exceptional contributions to teaching. This week we continue our series profiling all 10 of the 3M Teaching Award winners, with a look at Diana Austin, an English professor at the University of New Brunswick.

When Diana Austin saw a video of herself teaching, she could not have been more embarrassed. As she lectured in front of the class, she became wildly animated. “I was horrified to see how expressive my face was,” says the University of New Brunswick English professor. “I actually apologized to my students.”

There was no need. Austin’s intensity, where “whatever emotions” she is teaching “flit right across” her face, is what draws students to her. Her apology was rebuffed by her class as unnecessary.

That enthusiasm for English literature and poetry has been charming students for years. Sean Yeomans, who graduated from UNB in 1995, says what he remembers most fondly about Austin was “her waving her intensity and passion” at the authors she taught.

Yeomans, who is CEO of Prince Edward Island video game developer, Telos, credits Austin with helping him to “harness a thought and wrestle it down.”

Once when Austin, a notoriously hard marker, awarded him a “B” on a paper, he visited her to see how he could improve. She tore “apart the entire essay from beginning to end,” Yeomans recalls. While going through that exercise with another professor, might have been excruciating, Yeomans welcomed it from Austin. “I was hungry for that kind of attention to detail and she recognized that and she was fired up,” he says.

Third-year English student Ashlee Joyce, would agree with that sentiment, describing Austin as a “coach” who is always “in your corner.”

The first is called “designated speakers” where at the start of each class a different student gives their opinion of that week’s readings. “Dr. Austin has a way of making every student feel valued for their idea. Any interpretation is on the table for discussion,” Joyce says.

The other exercise is “rants and raves” where three times each term, students submit a couple paragraphs, via email, about either what they loved or what they hated about a particular reading assignment. Students are encouraged to be informal, and to draw comparisons between the readings and events in the world or their own lives. “She really believes in developing each individual student,” Joyce says.

Austin would be heartened to hear her students speak that way as it illustrates almost perfectly her teaching goals. “My attitude is to teach every 50 minutes as if it is the most important 50 minutes for any of our lives because we don’t know what’s going to happen,” she says.