What students are talking about today (February 28th) 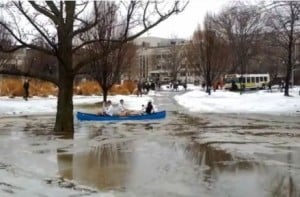 1. Students at McMaster University got creative crossing their slushy Hamilton, Ont. campus after a major winter storm hit Ontario on Tuesday. They paddled across it in a canoe. Someone made a video and posted it to YouTube where it already has 55,000 views and was shown on air by CBC News Network. Meanwhile in Ottawa….

2. Ryerson University student Sarah Santhosh wants to start a men’s issues group on campus called the Ryerson Association for Equality that would discuss mental health, male youth violence, misogyny, as well as gender disadvantages in education, the workplace and custody battles. “Universities are supposed to be places where any and all ideas are accepted and discussed. Nothing should be too taboo for discussion,” she told The Eyeopener. It’s unclear whether the Ryerson Students’ Union will prevent the group from gaining status considering vice president equity, Marwa Hamad, previously said that, “marginalized or underprivileged student members should be the focus of equity service groups on campus.”

4. A number of special interest groups are more or less backing Vancouver MP Joyce Murray in the federal Liberal leadership race where Justin Trudeau is the front runner followed by Marc Garneau and Martha Hall Findlay. Joyce supports co-operation among Liberals, New Democrats and Greens to increase the likelihood of defeating Stephen Harper’s Conservatives in 2015, a goal many activist groups share. Those who want to vote in April’s leadership race need to sign up before Sunday, which is why this is such a hot topic now. Leadnow.ca, with the support of director Sarah Polley and activist Naomi Klein, is pushing its members to sign up, reports The Canadian Press. Avaaz, a left-wing activism group, has e-mailed more than 500,000 people urging them to also participate in the contest. A number of environmentalists, including David Suzuki, have endorsed Murray because she’s against pipelines that would bring bitumen from Alberta to the Pacific.

5. A columnist for The Carillon at the University of Regina has come out in favour of higher taxes to beef up university funding. “Taxes have been labelled as job-killing, money-grubbing, and the ultimate pain-in-the-ass,” writes Edward Dodd. “But this rhetoric surrounding taxes ignores that taxes are an essential part of contemporary society. This isn’t the Wild West where vigilantes take care of law, people expect to die of tuberculosis before age 40, and there’s one rail line for transportation.This is an advanced society that comes with roads, rails, planes, hospitals, police stations, schools, universities, and a wide variety of other modern comforts we take for granted,” he adds. His view may be unpopular, especially with those who—unlike most students—pay taxes.