Can't afford a hall? How about a stall? 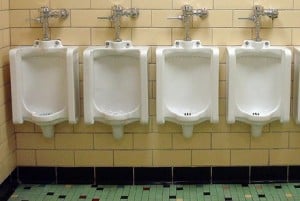 Cash-strapped Canadian universities will want to read this story from Inside Higher Education.

A Utah college is selling the naming rights to bathroom stalls on campus to raise money for a bankrupt musical theatre company.

MIT rejected an offer to buy naming rights for a washroom from venture capitalist Brad Feld a decade ago. He then paid $25,000 for a washroom at the University of Colorado instead.