Where to catch the Balconies, Matt Mays, Basia Bulat... 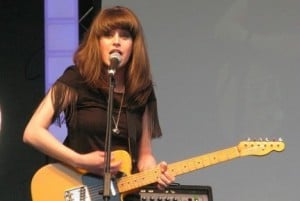 Jacquie Neville of the Balconies (jfingas/Flickr)

This week, Canadian music fans will be treated to a collision of chamber and indie, a gig in a farmer’s market, a folk darling accompanied by a full orchestra, and much more. So tear yourself away from textbooks and Facebook and kick the weekend off early with one of these can’t-miss campus shows.

1. Toronto’s the Balconies are rock and roll through and through. Their powerful vocals and kicking riffs make for an ear-splitting experience, and they’re best heard live.  The trio, brother and sister Stephen and Jacquie Neville plus Liam Jaeger, play Louis’ Pub at the University of Saskatchewan on Oct. 10. Ticket info is here.

2. Fresh off the release of Coyote, his first album in nearly four years, Roots rocker Matt Mays teams up with The Meds to play The Ale House in Kingston, Ont. on Oct. 10. Ticket info here.

3. London-based Basia Bulat’s brand of folk is at once breathless and big-voiced and accompanied by the uncommonly-heard autoharp. The singer-songwriter takes the stage at Hamilton Place, along with the Hamilton Philharmonic Orchestra on Oct. 13. McMaster students, ticket info is here.

4. It’s not often that an indie rock band like Hey Rosetta! would appear live at a farmer’s market, but for this year’s TommyFest in Fredericton, attendees will see just that. The band will bring some iteration of their multilayer sound on Oct. 15. along with locals Redwood Fields. Ticket info here.

5. Having just dropped an EP best described as chamber folk with post-rock influences, The Wilderness of Manitoba tour Ontario this fall, stopping in Guelph on Oct. 12. More info here.

In the third installment of the Southern Souls-filmed Mojito sessions, the Balconies teamed up with fellow Torontonians Hands and Teeth to cover Justin Bieber’s mega hit Baby. Check it out: