Say goodbye to grocery bags on the bus 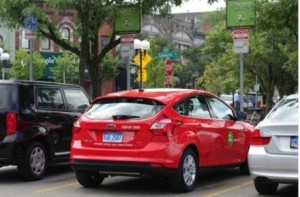 Zipcar, the world’s biggest car sharing company, is placing a fleet of Ford Focus vehicles at 11 Canadian campuses in Toronto and Vancouver.

Students who buy annual memberships (starting at $25) will be able to reserve the cars online or with their smart-phones and then unlock them with special cards. With rates starting at around $10 per hour (including gas and insurance), car sharing makes more sense than ownership for many students, especially those who mostly use their vehicles for trips to Ikea or grocery stores.

Zipcar says car sharing may also help alleviate university parking shortages. Parking is so scarce on urban campuses that it now costs more than $600 for eight month passes at many schools. Click here to see a list of the 10 schools with the most (and least) expensive campus parking passes.

The University of Toronto, York and UBC are among the 11 schools getting Zipcars.