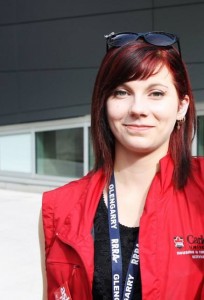 At least two Carleton University residence fellows have quit their jobs after a failed bid to unionize that they say was prompted in part by safety concerns about a coworker who talked about guns and retaliation—a claim they say wasn’t taken seriously enough—and an employment contract they say wasn’t fair.

Residence fellows, called “residence assistants” or “dons” at some schools, are the cheerful folks in colourful vests who help students living on campus with everything from moving boxes during frosh week to dealing with mental health issues late at night.

Miranda Moores and Marina Tronin are no longer smiling or wearing vests. They are living off campus and studying for exams they say they couldn’t write last semester because of mental health issues they blame on a stressful workplace.

Moores says that, when she first signed up three years ago, being a residence fellow sounded like a good deal. She got a room and a meal plan worth more than $10,000 for eight months of work, which she expected to be about 20 to 25 hours weekly. Although she returned for a third eight-month term this fall, she says the compensation wasn’t fair.

“I had 76 students last year,” she says. “It’s a lot to have to one person.” She says fellows were required to be on duty from 10 p.m. to 7 a.m. five nights per week with few exceptions. Add in weekly team meetings, professional development, patrols of residence halls five nights weekly, social programming, mental health crises, mounds of paperwork and at least one brawl and she says the job often took more like 40 to 60 hours weekly. On top of that, she says the contract included unreasonable clauses like the right of managers to assign unspecified “other duties.”

Carleton asserts that fellows are only on duty an average of 20 to 25 hours a week.

Moores and Tronin weren’t just concerned about the workload. They also worried about a team member they say was harassing them and threatened their safety.

“He was very active in telling us he had a gun, was in the military and was a marksman,” says Moores. She says he spoke of “retaliation” and was physically intimidating to her and to students.

“He would puff out his chest and come towards you as if he was going to do something and stop right in front of you or stop where he was touching you with his chest,” she says.

“It was hard to keep his temper in check,” says Tronin. “In our head, a school shooting was about to go down.”

They say their concerns were brought to their manager in August and September. After telling another residence manager, they had a meeting with Natalie Allan, assistant director of housing. In mid-October, they learned the teammate had been terminated. They still didn’t feel safe. For one thing, the coworker was allowed to move temporarily to a new room in the same building. They were also denied a request made to Allan Burns, director of university safety, for extra protection.

Neither Allan nor Burns would comment on the matter and Carleton did not provide anyone else to answer questions about whether they believed students were ever at risk. They issued a written statement that included the following: “We do not provide details about harassment claims. However, we take all claims very seriously and we respond promptly by involving the appropriate university authorities. The investigation process contains the option of an appeal if disciplinary measures are taken. It is important that all claims are subject to the same rigorous process.”

Feeling stonewalled, Tronin and Moores decided a union was the only option left. After discussions with a CUPE local that represents contract workers on campus, they were given a stack of union cards. It only took three days to get 51 per cent of residence fellows signed up. CUPE decided not to proceed. Both women quit their jobs in December. They are now in discussions with another union that might be more willing to take them on. They say they are in a better position than current fellows to advocate for residence fellows’ employee rights.

“Nobody loves this job,” says Tronin. “People are doing it because they needed a place to live.”

Carleton University says it respects the right to unionize. “We highly value the work of our fellows.”