Students rebuffed in request for details on wages, lawsuits 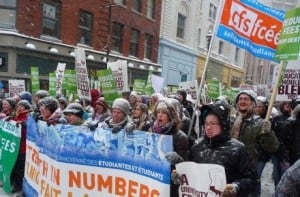 A CFS rally in Ottawa (handout)

Students got a rare peek this week at how the Canadian Federation of Students’ national organization spends their money after blogger Brandon Clim published the organization’s 2014 budget and audited financial statements.

However, the juicy details many have wondered about—how much individual staff members earn and how much is spent on lawsuits with local student unions—still haven’t been made public.

In fact, members of CFS’s own budget committee, at last week’s Annual General Meeting in Ottawa, say they were rebuffed in attempts to learn more.

And although the financial documents are now online, outgoing treasurer Michael Olson says they won’t show up on the CFS’s own website anytime soon, because members have rejected that idea.

Arzo Ansary, a student representative from Kwantlen University, is one of the students who pushed for more details on staff and legal costs. During a meeting on June 1st, her motion to compel the treasurer to create a spreadsheet of what staff members were paid (without names attached) failed.

Wages fall under several sections of the $3.4-million budget funded mostly by fees tacked onto tuition bills at campuses where students have opted join the national lobby group. Aside from the elected chairperson, deputy chairperson and treasurer (who are paid $43,995 plus benefits) there is no place in the budget that shows what individual employees earn, or even exactly how many employees there are. Ansary says she was told only that there are 30 to 35 employees.

After the meeting, Olson provided some further details. For example, in the budget section for Administration and Office, wages added up to $190,696 for 10 months year-to-date; $50,696 more than was budgeted for the entire year. On top of that, $29,134 listed was listed as “employer costs and benefits” over 10 months. He says that covers four full-time-equivalent employees.

Although the budget was overspent for that item, the numbers suggest wages that are in line with the median hourly wage for “administrative officers” in Ottawa—$25.13 according to federal statistics. Still, there is no way for Ansary to know whether some employees were paid more or less.

Ansary was also disheartened by the failure of a motion asking for a list of current litigation expenses. Olson, the treasurer, says “it’s not the mandate of the budget committee to review.”

An attempt to reduce the “legal” line item in the budget from $120,000 to $60,000, in light of the fact that only $40,352 was spent in the first 10 months of fiscal 2013, also failed. It’s notable that CFS did not spend a large percentage of its budget on lawyers’ fees in the first 10 months of fiscal 2013, despite involvement in recent years in multiple legal disputes, such as the case at the University of Guelph, where the CFS has not recognized a student referendum to leave the organization.

Brad Evoy, a veteran of the student movement and a commissioner of the Graduate Students’ Union at the University of Toronto, agrees that students should have budget transparency, but wasn’t surprised it was rejected. “These are the same questions that someone in the room asks every AGM,” he says.

Evoy faced defeat in his own attempt to reform the organization. He put forward a motion to bring the number student signatures required on a petition to initiate a referendum to exit the organization back down to 10 per cent of the student body after it was raised to 20 per cent.

Because he feels reform is unlikely, he quit his post as Ontario Students with Disabilities Constituency Commissioner.

The other big news was that Jane Lytvynekno, Ottawa Bureau Chief of the Canadian University Press and a Maclean’s On Campus contributor, was not allowed to attend the closing plenary meeting. The CFS only allows one journalist from the student newspaper wire service to attend each AGM and the person to whom they offered credentials called in sick on the day of the meeting.

According to Olson, Lytvynenko wasn’t allowed to replace him because “there’s a media protocol that she agreed to [while covering the last Annual General Meeting in November] and she signed and a lot of her actions were flagrant violations of that protocol.” When asked for a details of that protocol or how Lytvynenko violated the policy, Olson said he would not elaborate.

Lytvynenko wrote a commentary for On Campus criticizing the CFS after the last AGM.