Who gets the highest marks? 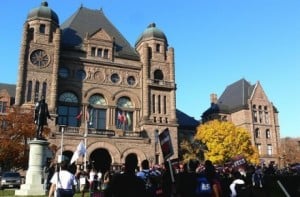 The Canadian Federation of Students has released a report card for each of the four party leaders who hope to be premier of Ontario after the Oct. 6 election. They graded them on tuition fees, funding, research and student debt.

The CFS has long lobbied for lower tuition fees. Here’s how the parties were graded on that measure: The Liberals and Progressive Conservatives got Fs for tuition, because “the Liberals have increased fees by up to 59% since 2006,” and because “the PCs have not made any commitments to regulate, freeze or reduce tuition fees,” writes the CFS. They gave the New Democrats a B, because “the NDP has promised to freeze college, undergraduate and graduate tuition fees if elected.” The Greens got a C+ for their plan is to freeze tuition fees and then allow them to grow with the rate of inflation.

Overall, they gave the Liberals a C+, the PCs a D, the New Democrats a B+ and the Greens a B-.

It’s worth noting that students care about more than just education issues. In a poll for the Historica-Dominion institute before the federal election in April, students were asked to rank their top concerns. Only 18 per cent put “paying for my post-secondary education” in their top-three list. Health care, military and economic conerns were all ranked significantly higher by those polled.