Deadly stampede at University of Johannesburg

Students had been waiting in line for days 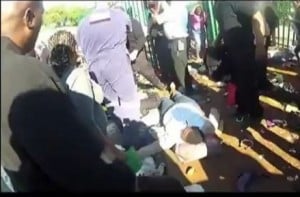 A woman died from head and chest injuries and three others are in critical condition after a stampede at the University of Johannesburg in South Africa, reports The Telegraph.

The chaos can be viewed in this amateur footage.

It happened on Tuesday morning after hundreds of applicants and their families stormed a gate to try and get coveted spots in the university. Some had waited in line since Sunday morning. The university received 85,000 applications for 11,000 first-year spots. The seats available Tuesday were “overfill.”

South Africa has a youth unemployment rate of roughly 50 per cent, according to the OECD.