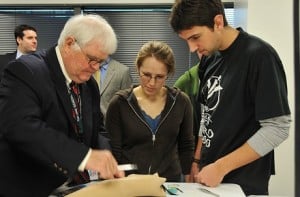 Medical school applicants at the University of British Columbia will no longer take part in a block-building exercise, reports the Vancouver Sun.

But the other exercises that make-up the school’s Multiple Mini Interview (MMI) process are here to stay, according to Dr. Joseph Finkler, associate dean of admissions at UBC.

The news comes after Dr. Brian Day, former head of the Canadian Medical Association, wrote an editorial in the B.C. Medical Journal, calling the MMI process “contrived, artificial, and bizarre.”

The MMI, now the norm in Canada, requires that applicants move through several different stations to be assessed by interviewers who attempt to discern motivation, social concern, creativity, maturity, integrity, empathy and more.

At UBC that includes a station where students imagine themselves as an animal, a station where actors fight in front of the applicants, and—until now—the blocks station. Finkler told The Sun that the block station didn’t perform well as an indicator, which is why it won’t be part of the MMI next year.

MMI is an increasingly common way to pick doctors in Canada. It was developed at McMaster in 2002 and quickly spread to a majority of Canadian medical schools—and beyond. A 2004 study published in the journal Medical Education found that it reduces interviewer bias and provides valuable insights into applicants’ abilities. A 2007 study in Medical Education found correlations between MMI results and later performance in clerkships and on national licensing exams.

But Day argues in his editorial that the old system, with a single physician interviewer, was less biased. “At a recent meeting of a group that included many successful leaders in our profession, this topic was raised,” he explains. “Virtually none of those present felt they would have succeeded in gaining entry to medical school if current methodologies had applied in their time.”

Day admits that Canada’s medical schools end up with good doctors, but he says that’s simply because so many apply. Indeed, in-province success rates for medical school admissions range from four per cent at Northern Ontario School of Medicine to 39 per cent at Dalhousie University, according to the Association of Faculties of Medicine of Canada.