Does this count as summer school?

I never knew that hair could talk

Last weekend I did something for the first time in my life. Ever. I went to a hair salon.

Yes, my sister made me do it.

According to my sister, my old haircut said “super nerd who doesn’t care about his appearance.” I didn’t know that a hair cut could say something that specific about a person. Actually, I didn’t know hair could talk. But for the record, my hair was lying. I do care about my appearance.

But last Saturday, after spending three intense hours up close and personal, observing the secret sub-culture of a professional hair salon, I think I should get an advanced credit in anthropology. Or at least some sociology course.

For instance, I learned that there’s actually a difference between barbers and hair dressers. Before my trip to the hair salon, I figured that barbers were just the Old West version of hair dressers. I mean, both of them cut hair. I didn’t think there was much room for difference.

And those gigantic, ceiling-mounted high-tech hair dryer thingies that look like they’re from some lame science fiction movie? They actually exist.

When I first showed up at the hair salon, Vinny, the hair dresser, handed me a booklet. A booklet that contained little pieces of hair. At first, I was horrified. I had to stop myself from emitting a high pitched scream and dropping it to the floor. I was holding a little scrapbook of voodoo dolls.

Once my heart rate returned to normal, I had to force myself to think happy thoughts. Never mind voodoo dolls. It was like being handed a saltshaker filled with toenail clippings. I now have a new nightmare: that booklet, spilling into my bowl of breakfast cereal. Millions of hairs. All different colours. All over the place. Airborne.

After my sister finished her conference with Vinny, with me pretending not to listen as they discussed my washed-out skin tones, helmet hair, and lack of any texture (people have, uh, texture?) it was decided.

Of course, no one thought I needed to know what was going to happen next.

Next I had my hair washed. Leaning back in a chair, my scalp being washed by a complete stranger, has to be the most vulnerable I’ve ever felt in my life. Until five minutes later, when Vinny wrapped a small, airtight plastic cap around my skull, complete with a vinyl cape. 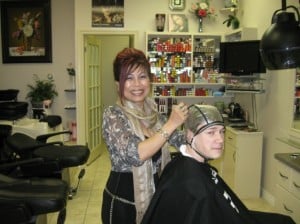 The surface of the cap was covered in millions of little holes. When I noticed that the hairdresser was wielding a mini pickaxe, I didn’t make the connection right away.

And then I figured it out. The hairdresser was going to pierce through the cap (which was vacuum-sealed to my scalp), and then somehow pull a strand of hair through one of those tiny holes.

“This might hurt a little,” Vinny warned me. And then she jumped, gaining as much leverage as possible, and brain fluid squirted across the hair salon.

When my sister had highlights put in her hair, Vinny neatly wrapped little pieces of tinfoil all over her head and used a paintbrush. Had I inadvertently broken some social code of hair salons, and was being punished?

When I regained consciousness and tuned in to my sister’s and Vinny’s conversation, I suddenly realized that every second word was, “blah blah blah.” Apparently my sister couldn’t live without “blah blah blah.” She used “blah blah blah” every morning. And although “blah, blah, blah is fairly expensive, it’s really worth it.”

I finally figured out that “blah blah blah” wasn’t some sort of code word. It’s actually a short, round, purple bottle. Filled with hair stuff. And apparently it costs a lot.

Never mind anthropology or sociology. The whole thing was a learning experience in linguistics. After listening to my sister and Vinny, I could probably fake my way through hair salon dialogue for at least three minutes. Heck, five minutes, if I was allowed to fill every sentence with “blah blah blah.”

When I first caught a glimpse of my hair in a mirror, I thought something had gone horribly wrong. I’m used to a solid helmet of brown hair. Now I had bright yellow stripes all over my head. Or more like chunks. Yeah, chunks. Suddenly I understood how people can have texture in their hair.

I thought my sister was just messing with me when she said to the hairdresser, “Wow, great! That looks perfect!”

I was busy wondering how I could get home without another human being seeing me between Vinny’s and my place. Or more importantly, how to avoid all future human contact until my hair grows out a couple of inches and I can chop all of that ‘texture’ off.

Or most important of all: how to avoid seeing my three younger brothers ever again. Because when my new haircut speaks to my brothers, I already know what it’s going to say.

“Give Scott a punch in the gut.” 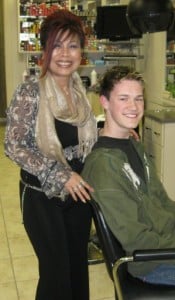