March to legislature draws all kinds of supporters 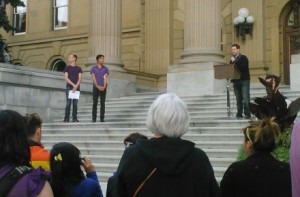 Rabbit (Centre) outside the Alberta Legislature

Two weeks after University of Alberta student Chevi Rabbit fell victim to an apparent hate crime near campus, hundreds of Edmontonians supported him with a march against homophobia.

The NOH8 Edmonton March and Rally, which boasted over 300 confirmed attendees on Facebook, included a march from the university to the Alberta Legislature for the rally on Thursday.

Notable speakers were U of A Director of Community Relations Michael Phair, Progressive Conservative Deputy Premier Thomas Lukaszuk and the leader of the Alberta Liberal Party, Dr. Raj Sherman. Many commended Rabbit for his bravery and offered words of encouragement to the GLBTQ community. Some shared personal stories of experiences with homophobia.

The assembly closed with Broadway singer and Tony award nominee Michelle Rios’s rendition of “True Colours” by Cyndi Lauper and some remarks from Rabbit himself. Despite the attack, he had positive words for Edmonton: “Here, it’s okay for you to be your own, unique self,” he said.