Entertaining, if you don't take it too seriously 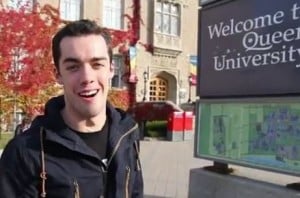 Most universities get stereotyped—most unfairly.

Guelph is thought of as the cow college, even though agricultural students comprise only a tiny fraction of the student body.

The University of Victoria has a reputation for attracting laid-back hippies, even though it’s a research powerhouse that ranked second in the 21st Maclean’s University Rankings.

And Queen’s University? Well, its stereotypes are multiple… and legendary. Queen’s has a reputation for being an upper-crust, primarily-Caucasian institution where students drink to excess, have a lot of sex and think very highly of themselves.

The fact that the stereotypes are partially true is what makes this new video by the Queen’s Players comedy troupe so darn funny. It’s no wonder that it’s approaching 35,000 YouTube views.

One can argue about how fair the Queen’s stereotypes are, but they’re certainly well-known. Just ask the experts. “Queen’s students feel they’re a little more elite and exclusive,” Tony Chambers, director of the Centre for the Study of Students in Postsecondary told Maclean’s earlier this year.

Even Queen’s President Daniel Woolf offers his own examples of how highly Queen’s thinks of itself. “It would have been unthinkable 20 years ago that the quality reputation of undergraduate education at Queen’s would be challenged by Waterloo and McMaster …to say nothing of Guelph—but it is clearly happening,” he wrote in a recent leaked letter regarding Queen’s unique “pedigree.”

The troupe’s video is a nod to the Everest College TV commercials. You know the ads. They have in-your-face students who say: “Why you making it so complicated? It’s easy! Choose Everest.”

It shows a series of students walking briskly through campus talking directly into the camera.

One women in the video says “stop waiting for your mom to bring you pâté… go to Queen’s University.” Another guy mocks the rich kids too. “I don’t know what financial aid is…” he says.

Another plays the part of the elitist. “What did one Queen’s student say to a student of another school?,” he asks. “Nothing, cause he was better than him.”

An Asian girl asks: “Are you a minority? Queen’s needs you. No, seriously… Queen’s prides itself in being accepting to all. In fact, sometimes we’re so politically correct we’re borderline racist.”

And a couple more actors allude to the binge drinking at Queen’s, which is actually a serious problem that the school, to its credit, is working hard to address. “Stock up on plaid boys, ’cause after class, we’re going to the Ale House,” says one guy. “That’s right, you’ll wait in line for two hours freezing… but when you finally get in there will be someone for you to make out with, guaranteed.”

Of course, the video is only entertaining if you don’t take it too seriously. Stereotypes aside, Queen’s has an excellent fourth-place standing in the Maclean’s University Rankings. It’s also difficult to criticize an institution that recognizes its exclusive past and, in an effort to increase access, devotes more of its student budget to bursaries than nearly every other university.

Still, it appears some people took the video a little too seriously.

Queen’s officials felt compelled to Tweet today: “To all those who have been asking, the video “I Go To Queen’s!” is not an official Queen’s University production.”