Nearly half say they have fewer children than desired 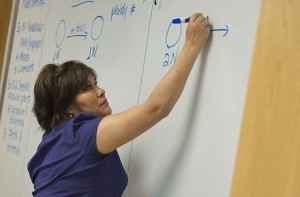 A new study in PLoS One found that women working in science are less satisfied than their male counterparts in a number of ways.

Similarly, more female faculty said they have trouble balancing work and family life — 48 per cent versus 32 per cent.

The study also showed that women are slightly less satisfied with their incomes and slightly more dissatified with their working hours than their male colleagues are. They also claim to work one hour more per week on average than men (56 hours versus 55 hours).

The findings may help to explain why fewer women are attracted to jobs in science. Just last week, the U.S. Department of Commerce published a study that showed that women hold only 24 per cent of STEM (Science, Technology, Engineering and Medicine) jobs, despite making up nearly 50 per cent of the workforce.