Five things you shouldn't do in first year

Entertaining (but true!) advice from a third-year student 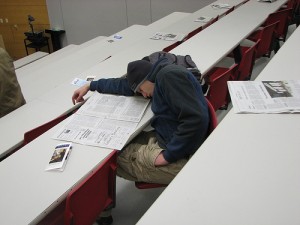 There’s still over a month of summer vacation left, but as a soon-to-be freshman, the advice is already starting. Everyone is telling you what you need to do, talking about how you’re going to ‘find yourself’ in university, and prattling on about how you need to stay on top of the readings.

So we thought we’d provide you with some anti-advice. You know, the top five things you shouldn’t do in your first year. Here are the top five:

1) DON’T: Listen to the podcasts that your professor uploads after each lecture

It’s a slippery slope. At first it’s just a study tool,  a way to reinforce everything you heard during the lecture. After all, repetition is the best way to learn, right?

But the next thing you know, your chemistry class is no longer a lecture hall with hundreds of other students three days a week at 8:30. It’s a bedroom at 2:30 in the morning the day before the exam.

2) DON’T: Bring your laptop with you to the library

Stop kidding yourself. You won’t be using that laptop to research your lab report, or to write your essay, or to flip through the PowerPoint notes from biology class. You’ll be watching this video.

It’s much better to just bring your books.

Why? Because “such as” is two words, cutting the required word-count effort in half. And if your word count is still coming up short, throw a chin-stroking “perhaps” or two and an: “As evidenced by…”

4) DON’T: Sit at the back of the lecture hall

Do you remember sitting at the back of the bus on the way to a field trip? The land of spit balls and minimal teacher intervention? The back of the lecture hall is a similar territory.

But unlike the back of the bus,  you’re not dodging paper airplanes — you’re surrounded by Tetris players. And unlike the front of the lecture hall, you’re not learning about valence states and atomic structure — you’re overhearing how wasted Jake was last night.

If you actually want to hear what the professor is saying, don’t sit in the back.

5) DON’T: Utter the words, “There’s no final exam, so this course will balance out my physics and chemistry courses.”

That’s a direct challenge to the Elective Gods. Their response is usually a 5,000 word essay about the juxtaposition between modern man in a consumer-driven society and the ambitions of Macbeth.

When you write an exam, it’s over after two hours. You either get a good mark or you bomb and then vow to change your study habits. Then you do pretty much the same thing for the next exam.

And that is much easier than an essay.