People will protest anything. Or will they? 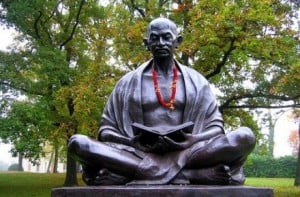 Gandhi statue in Geneva, Switzerland by cosmicautmumn on Flickr

On the weekend, Carleton University and McMaster University both unveiled statues of Gandhi in celebration of Gandhi Jayanti, the political leader’s birthday, a national holiday in India. The celebration was part of the Year of India in Canada, an initiative to strengthen cultural and economic ties between the two countries.

But in the days leading up to the Carleton statue unveiling, a group inspired by New York activist Arvin Valmuci created a Facebook group called “Stop the Carleton University Gandhi Statue” and sent an open letter to the school demanding they revoke the statue—or risk protests. They pointed to a website claiming Gandhi was guilty of “racism, sexual perversion and hatred of minorities.” Among other things, they allege that Gandhi “slept with his grandnieces.”

It may seem odd to Canadians that people could hate Gandhi.

But many do. Valmuci works with a group called the Organization for Minorities of India. The same group protested a 23-year-old statue of Gandhi in San Francisco last year. The group called for the statue to be replaced by Martin Luther King Jr. or Nelson Mandela. After telling the San Francisco Chronicle they wouldn’t take it down, P.J. Johnston, the man responsible for the statue said, “I suppose Martin Luther King Jr. and Nelson Mandela must have their critics as well.”

It’s true, they certainly do. There will always be people opposed to any political symbol on university campuses, even if that symbol is nearly-universally lauded for promoting peace like Gandhi.

Like the San Francisco Arts Commission, Carleton decided to ignore the group against the statue.

Whether they made the right choice seems almost moot. No protesters showed their faces.