Get ready for a long summer in Quebec 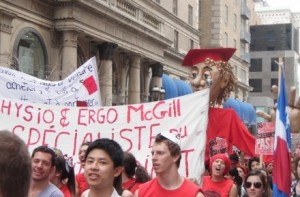 With student groups representing over 160,000 students still enforcing boycotts, Quebec’s “maple spring” looks like it will turn into a long summer.

On Monday, Quebec’s education minister Line Beauchamp resigned suddenly. In her resignation speech, Beauchamp blamed student leaders for being unwilling to compromise. That’s after she spent the previous week saying that she would only discuss small details of the tentative agreement made on May 5, which fell apart after it was rejected by most student associations.

Quebec’s new education minister, Michelle Courchesne, was sworn in Monday. She has experience, having held the portfolio from 2007 to 2010. She also has her work cut out for her.

During her first day on the job, riot police once again clashed with protesters outside a CEGEP.

That comes a day after Montreal’s Rosemont CEGEP cancelled classes because of a police and protester standoff. Administrators had ordered students to return to class today, but changed their minds early in the morning, citing safety issues.

Two CEGEPs, where students have boycotted classes for more than 10 weeks, say that they would now need to extend classes into August if they are to salvage the semester started in January.

While incidents of violence during student protests have alienated some Quebecers, they haven’t necessarily translated into more support for the government. Quebec’s official opposition, the Parti Québécois, has called for a public inquiry into police conduct at last weekend’s riot in Victoriaville. Even ordinary citizens criticized the police response, which they say was too violent.

While some student groups have been criticized for failing to condemn the violence, they have worked to distance themselves from those who have caused the most disruptions like the four accused of setting off smoke bombs in Montreal’s metro system last week. They are allegedly affiliated with the “Force étudiante critique,” a group so radical it opposes any negotiation.

Meanwhile, there are calls for the government to delay negotiations to avoid more serious injuries. The “white square” movement, (whose supporters wear small white cloth squares like the red ones sported by the anti-tuition movement) was started by a group of parents and has now been joined by 50 doctors. They want negotiations postponed until there is longer a “climate of terror.”

The big question today is this: Can Courchesne succeed where Beauchamp has failed?

It will be difficult. Courchesne did, after all, initiate Quebec’s last round of tuition hikes, which were $50 a semester over five years. Although those increases were greeted with protests, they prompted nothing like the current anger over plans for annual increases of $254 over seven years.

Jacob Serebrin is a recent graduate of Concordia University in Montreal. Follow @JacobSerebrin.