Villeneuve tells students to go back to school 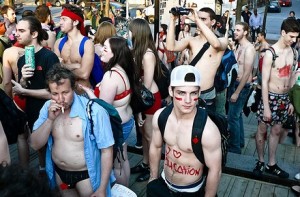 At a “naked protest” in the afternoon, they shouted “Formula One! Polluter! Sexist! Thief!,” reports National Post. Some marched in their underwear, some were topless and many covered their faces with veils or sunglasses. Rather than being scared away, tourists snapped photos.

At a red carpet event later in the day, Formula One legend Jacques Villeneuve “unleashed a five-minute diatribe” as police arrested 37 people outside the building, according to QMI Agency.

“They’re expressing their freedom but what they don’t take into account is that they’re taking (freedom) away from lots of people,” said Villeneuve, who added, “it’s time to go back to school.”

Also on Thursday, Yalda Machouf-Khadir, the daughter of ultra-left Member of the National Assembly Amir Khadir was arrested in connection with smoke bombs that stranded 200,000 subway passengers in April. Amir Khadir, the Iranian-born co-leader of the Quebec Solidaire party, was arrested earlier in the week and compared his non-violent resistance to Mahatma Gandhi.

Last week, students rejected the government’s latest offer to reduce the tuition hikes by $35 per year, which would bring the total increase down from $1,778 to $1,533 over seven years.