What students are talking about today (February 8th) 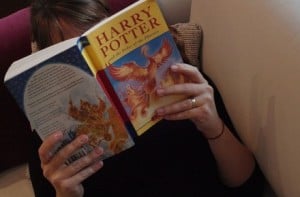 1. The Gazette student newspaper at Western University published an editorial this week on a new Harry Potter course that will be offered this fall. They came to the conclusion that it will not be a bird course. “Some may say authors such as Shakespeare, Hemingway and Joyce provide the reader with a much deeper, denser text…. while Harry Potter’s journey through Hogwarts is just too simplistic.” But they added, “Who’s to say there is not deeper meaning in Harry Potter? With adult themes such as challenging authority, self-sacrifice, tolerance and genocide, these books following the Boy who Lived should not be pushed aside as ‘just for children.'” However, proving that many students still need to improve their basic reading skills, the paper faced a backlash from those who took the headline “Harry Potter and the Bird Course?” to mean “Harry Potter is a bird course.” Editor Gloria Dickie responded with a second editorial reiterating that the editorial board does not see it as a bird course.

2. Yet another pro-life club, this time at Trent University, has been informed by a student union that it’s not welcome. One student union official said the reason is that “all the clubs at Trent University must be inclusive” and that “on campus we are not allow[ed] to have groups that take away rights or opinions of other people.” John Carpay, writing in the National Post, says he doubts the Trent Muslim Students’ Association and Trent NDP are “inclusive” of non-Muslims and non-liberals respectively. Meanwhile students are forced to pay upfront for all kinds of clubs with political missions that they don’t support. Whether you support or loathe anti-abortion groups, it’s discrimination to single them out.

3. At the University of Victoria, a student is pointing out another kind of discrimination. Victoria Perrie, writing in The Martlet, was offended when she applied for a bursary and was asked “Do you self-identify as a lesbian?” She was asked because the Michèle Pujol Scholarship is from a donor who prefers lesbians get the money. “Lesbians face discrimination achieving educational pursuits and financial assistance,” Perrie concedes. However, she asks, “why are special bursary opportunities available to lesbians when other sexual identities are excluded?” She goes on: “When answering this question, I felt my right to self-identify as bisexual, asexual, omnisexual, queer, pansexual or otherwise was denied.” Her preference, it turns out, is for awards that go to individuals who identify as lesbian, gay, bisexual, trans, two-spirited and queer. Here’s an idea: how about awards that go to anyone deserving of the money?

4. The Weal at the Southern Alberta Institute of Technology is exploring the phenomenon of making public displays of pre-marital celibacy through purity rings. Calgarian Sarah Tarnowsky, 22, said she’s been wearing hers since age 19. “The whole reason for me making the decision to not have sex before marriage is because I love God and I want his gift of sexuality to remain pure.” Tarnowsky has a boyfriend but she’s sticking to her no intercourse rule. Calgary Christian bookstore Lumen Christi Publications sells rings for men and women but says only the women’s rings sell well.