Illegal immigrants to get student aid in California

But bill to legalize affirmative action is dead 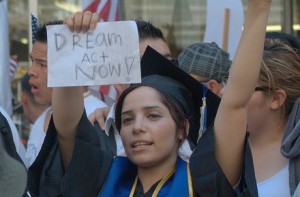 The first, which he signed into law, makes it possible for illegal immigrants and their children to be eligible for financial aid to attend California universities and colleges. As noted by the San Francisco Chronicle, “such students have the hardest time paying for college because they cannot legally be employed, they qualify for no financial aid, and their parents often are not wealthy enough to help.” The new grants provided to roughly 800 students per year under the so-called “Dream Act” will cost at least $13 million.

The second bill, which Brown vetoed, would have allowed universities to consider the race, gender and income of applicants to increase diversity on campuses. Such “preferential treatment” was outlawed by a voter proposition in 1996. Brown said he supports the affirmative action aims of the bill, but that it’s up to the courts to decide whether such a change would be legal.

That bill, SB 185, stirred controversy when Campus Republicans at UC Berkeley held an “Increase Diversity Bake Sale” two weeks ago at which they tried to demonstrate their dislike of such measures by selling baked goods at different prices, based on race and gender. Many campus leaders criticized the demonstration as racist and the student union’s senate had a special meeting to consider pulling their funding. At the bake sale, the cupcakes sold out quickly, suggesting strong support. But large numbers of protesters opposed to the sale also showed up.