Erinn Michèle Treff had an A average when she applied to graduate programs in social work. Not surprisingly, she was accepted by four of the five universities she applied to. In considering her options, one university stood out: York University, which offered her significantly more funding than any other program.

“I don’t have a lot of money and I already have a significant OSAP loan,” Treff says, “so when I was offered a funding package for $14,000 first year and $10,000 second year, it seemed like a no-brainer.”

So imagine her surprise when a few weeks into her second year, rumours circulated that social work students wouldn’t receive their full funding package. Treff emailed her department head asking for clarification, but received no response. A few days later the rumours became reality when a meeting was called: the students must have misinterpreted their acceptance letters, the university said, and they would only be paid $6,600 because the second year only consists of two semesters instead of three.

With the surprise cut to the funding she expected, Treff doesn’t know how she will afford to get through the year. After paying tuition she, like other students affected, is left with about $2,000 for everything else. She doesn’t have time for an extra job because she is already working the equivalent of two part-time jobs as part of her program: as a graduate assistant at York (for which she is paid with the funding package York rolled back) and as an unpaid intern at the Ministry of the Attorney General. The result? She hasn’t yet bought any books because she can’t afford them.

“I was absolutely livid,” Treff says, who added that she had planned to apply for two PHD programs at York. “When this happened, I shredded my applications.” In an online petition started by Treff, her anger is mirrored by over 300 students and sympathizers who have signed in the past six days.

“The university admin should be ashamed,” one commenter Cameron Campbell wrote. “I will not be donating any money to the University when I become an alumni over actions such as this,” pledged Graham Potts. “My family will also be doing the same.”

The anger seems not only in response to this series of events, but attached to resentment that has been simmering under the surface since last year’s strike, which kept 45,000 students out of class for three months. “I will never let any of my family members ever to go to York. First the strike and now this?” wrote Arvinder Singh, adding his voice to a number of petitioners who interpreted the strike and this move as a sign that the university mistreats students.

Treff says that although the strike was horrible, she understood it was necessary and didn’t hold a grudge. “Having our promised money taken away is another story.” She blames the Faculty of Graduate Studies and the administration of the university—not her specific program. “I love my professors and I love my program,” she says. “But it’s such a shame to have such a wonderful program dirtied. It’s embarrassing.”

York University did not respond to multiple phone calls and emails before deadline.

Treff was “dumbfounded” when she was told students misunderstood funding levels promised in their acceptance letters. Other students echoed this sentiment. “There was no letter misinterpretation of any kind. Bottle [sic] line is a contract was breached and we deserve our PROMISED money!!” wrote petitioner Josie DiPlacito. Treff agrees that the acceptance letter constitutes a written contract, and she alleges that York is breaching that contract. 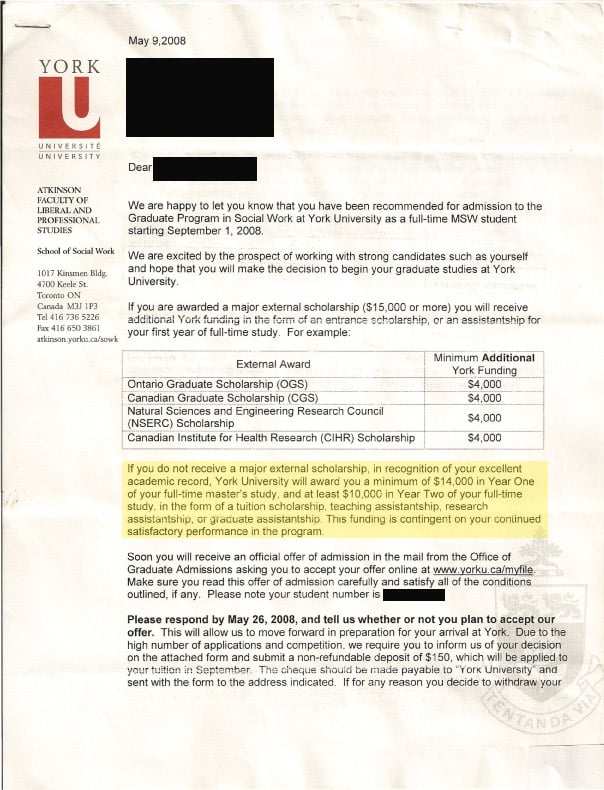 From viewing one of the relevant acceptance letters, it’s easy to understand the students’ frustration. The letter, signed by the dean and associate vice-president of the Faculty of Graduate Studies Dr. Douglas M. Peers, reads, “In recognition of your excellent academic record, York University will award you a minimum of $14,000 in Year One of your full-time master’s study, and at least $10,000 in Year Two of your full-time study, in the form of a tuition scholarship, teaching assistantship, research assistantship, or graduate assistantship.” There is no mention of funding being subject to the number of semesters in each year.

Students also lamented the decision because they have already informed the Ontario Student Assistance Program (OSAP) that they would receive $10,000 in funding this academic year, so they don’t qualify for student loans. “I am not eligible for OSAP becasue OSAP believes I will be recieving $10,000 of funding that was in my contract [sic],” wrote petitioner Amanda Rose. “I can no longer continue to pay my rent, food and necessities on my VISA!”

In addition to the online petition, social work students and sympathizers have launched a letter writing campaign. As of the evening of October 20, there had been no response from the Faculty of Graduate Studies. But in an email that summarized an October 20 meeting with students and administration in the faculty of social work, a student wrote that it appeared that the social work administration “has taken a turn and is now supporting us.” However, whether the funding is restored is up to administration in the Faculty of Graduate Studies. Both faculties will meet Monday, Oct. 26 to discuss the situation.