Let's get this party started

We examine how much students really drink, which province parties the hardest--and how to consume safely

It’s frosh week. You’re standing on the front lawn of a house when a headless mannequin flies through a second-story window in a shower of glass and lands at your feet. Loud dance music can be heard through the hole in the glass.

A staggering student passes as you walk up the front steps, across the beer keg-strewn front porch and through the front door, where you find yourself in a riotous party. Students mingle, empty beer cans are scattered everywhere and unidentified objects periodically fly across the room. A student crushes an empty beer can on his forehead. A motorcycle bursts through the front doors and flies up the stairs to the landing, where the rider opens a beer and hands it to the stunned freshman he just nearly ran over.

It’s a typical scene from frosh week at a Canadian university, no?  We all know that students are a bunch of irresponsible drunks, don’t we? 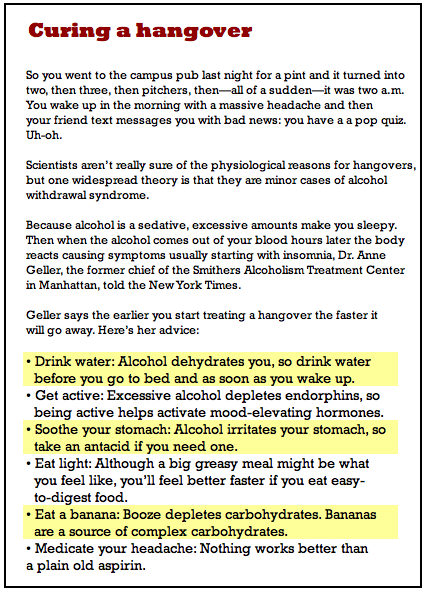 e sophisticated 1970s film connoisseur should have identified the above as the opening scene in Animal House. In order to figure out how much the Animal House stereotype is merely perception, Maclean’s OnCampus looked to the latest available research to determine just how much students really drink and which province parties the hardest.

During frosh week festivities it may seem like everyone on campus is partaking in more than their share of booze, but the reality is that the drunken second-year student you saw passed out on the couch at that house party is in the minority. According to a survey commissioned by the Centre for Addiction and Mental Health, 32 per cent of students reported hazardous drinking (which means experiencing symptoms like blacking out or feeling guilty). On the other hand, fifty-eight percent of students never drink more than five drinks in a sitting, and 38 percent of them drink less often than once per week.

Sociology professor Wesley Perkins, who studied drinking at 10 Canadian schools, thinks this is a problem, because students base their decisions about how much to consume on their perception of others. “The students who are already involved in heavy drinking think they’re like everyone else—their misperceptions reinforce their behaviour. Students who are not as prone to getting heavily intoxicated, but are ambivalent, are much more likely at a party to take that second, fifth or eighth drink because they think everyone is doing it,” he previously told Maclean’s.

Other factors affect how often students drink. Students are more likely to drink the farther along they are in their university career; 82 per cent of first year students drink compared to 89 per cent of fourth years. And, not surprisingly, students who live off-campus with their family drink less. In fact, students living on campus are twice as likely to engage in heavy episodic drinking,

How can all these broke students afford all that beer? Good question. As it turns out, having a job corresponds with alcohol consumption. A Statistics Canada report looking at the habits of fulltime students with jobs found that students who work are more likely to drink regularly. Working was also linked with heavy episodic drinking, defined as drinking five or more drinks on one occasion, 12 or more times in the previous year.

If you had to judge from headlines over the past few years which province has the hardest partying students, Ontario would be a reasonable guess. Queen’s University is infamous for its 2007 homecoming riot party that saw 6000 revelers flood the streets and ended in burning cars and scores of arrests. Last year, Fanshawe College in London, Ontario claimed the frosh mayhem title hands down after an entire week of out-of-control partying led to nearly 600 charges.

In reality, Ontario students actually drink less than the national average, along with students in British Columbia. (Maybe they just can’t hold their liquor?) While students in the Prairies and Quebec drink more than average, students in the Atlantic provinces drink the most.

When Memorial University participated in the National College Health Assessment last year, its students were found to have higher rates of binge drinking (56 per cent) than at any other Canadian university that participated. The booze had taken its toll; while under the influence of alcohol, 28 per cent of Memorial students were injured and 25 per cent had unprotected sex.

These consequences of campus boozing are the dark side of the reality not captured by the Animal House stereotype. And they are common across the country. Ten per cent of Canadian students experience alcohol related assault, 10 per cent are sexually harassed and 14 per cent have unplanned sexual relations due to alcohol consumption.

Since you’ve probably already gotten the “don’t drink at all!” lecture from your mom and you—like 85 per cent of your peers—probably drink anyway, we’re not going to be the ones to tell you not to unwind with a few drinks now and then. Nevertheless, here are some tips on how to consume safely:

• Don’t drink and drive: Remember that video they showed us in high school in which a teenager injured in an alcohol-related car accident gets a plastic tube shoved up his penis for some medical purpose?

• Learn your limit: New to drinking? Take it slow and pay attention to how it affects you. That will help you avoid getting out of control.

• Pour your own drinks at parties: It’s easy to mistakenly get smashed when the generous bartender at a house party is free-pouring rum and coke.

• Eat lots and drink water: It’s harder to get drunk on a full stomach. Drinking lots of water will help you pace yourself while preventing a nasty hangover.

• Don’t leave your drink unattended: Date rape drugs like rohypnol are invisible and tasteless and it’s easy for someone to slip one in your drink if you leave it unattended.

• Learn about campus services: Your university probably has programs in place to keep students safe while drinking or if a student develops a drinking problem. Learn about those in advance.

• If you have a problem, seek help: Drinking too much as a student can develop into a lifelong problem. So, go and see a campus counselor if you are experiencing signs of hazardous drinking such as blacking out, making poor decisions under the influence of alcohol, or missing class.

Erin Millar and Ben Coli are writing an advice book about going to college and university in Canada. Have a question about anything to do with university? Email us at straightupguide@gmail.com