A coast-to-coast round-up of remembrance 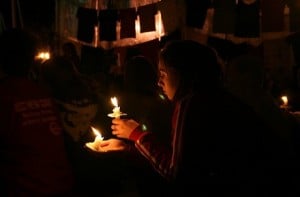 On this date in 1989, a young man named Marc Lepine rounded up women at the Ecole Polytechnique engineering school in Montreal and opened fire, killing 14 females and injuring 14 others before turning the gun on himself. In his suicide note, he blamed women for his problems.

Since 1991, Dec. 6 has been The National Day of Remembrance and Action on Violence Against Women. Across Quebec today, survivors of the shooting will gather with activists and ask the Quebec government to sue the Canadian government over Bill C-19, which will abolish the long-gun registry and—they say— allow more violence against women to occur.

Here are a few of the ways universities across the country are marking the sombre occasion.

St. Francis Xavier University—A service will be held at 12:15 p.m. in the Bloomfield Centre.

Nipissing University—Students will meet at the entrance to the school at 5:30 p.m. for a candlelight vigil and walk to the pond.

University of Windsor—The Womyn’s Centre and the Engineering Student Society will lead a 4:30 p.m. procession from the CAW Student Centre to the Memorial of Hope. There will be a screening of the 2009 Denis Villeneuve film Polytechnique at 7:00 p.m. at Vanier Hall.

University of Regina—The U of R’s Women’s Centre marked the occasion last night by holding up photographs of each victim and reading their names aloud with candles flickering in the foreground.

University of Northern British Columbia—The UNBC Women’s Centre hosted speakers on Friday to discuss violence and discrimination toward women in the north, home of the Highway of Tears.