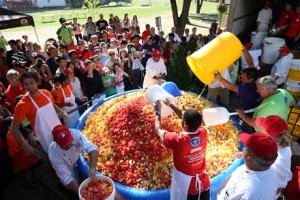 A fruit salad the size of a small swimming pool has claimed a world record for Montreal’s McGill University.

The 5,038-kilogram concoction dethroned Fresno State University on Tuesday for the Guinness World Record for the biggest fruit salad ever.

Volunteers sliced and diced their way through mountains of food, most of it grown at McGill’s Macdonald Campus Farm.

The event was part of the university’s Orientation Week held at its downtown campus and was aimed at promoting healthy eating and community involvement.

The event also had an environmental spin with all the waste being composted on campus.

“By at least 700 pounds, we’ve broken the record,” said a proud Oliver de Volpi, McGill’s executive chef. “Pretty satisfied with that. We used mostly our own fruit from our own farm so there’s something to be proud about for local ingredients.”

De Volpi, dressed in a multicoloured chef’s jacket, had urged his team on over a four-hour sprint, calling out milestones in the weigh-in process as buckets of fruit salad were hauled out to a scale.

“It took about 300 volunteers over a couple of shifts,” an elated de Volpi said.

Amanda Mochan, an adjudicator with Guinness, confirmed McGill had beat the American record, which stood at 4,698 kilograms.

“The record will be in our database and on our website, guinnessworldrecords.com, and it’ll be considered for inclusion in the 2014 book,” she said.

“This was a lot of fun,” Mochan said of the event, which she praised for its community involvement. “I think the food-based records are really special because it’s something that’s universal. Everybody loves to eat, everybody loves fruit.”

Mathieu Laperle, director of McGill Food and Dining Services, said the idea had come up in a discussion with the service’s staff.

“The goal was not only to beat this record but to promote healthy food,” he said. “We’ll serve 3,000 people and at the end of the day we’ll send the balance to different shelters in Montreal.” Groups such as Meals on Wheels will also get a portion.

Volunteers and guests at the event got to chow down on the massive fruit salad and some of it also went to the school cafeteria.

Corinne Cadou, director of events and major gifts at the Old Brewery Mission, said her clients will appreciate the bounty, which was picked up in trucks after the results were announced.

“People think of the homeless a lot during the winter but during the summer we’re just as busy, working at full capacity almost every night,” she said, noting the Old Brewery is one of Canada’s largest homeless shelters.

“This is fantastic,” she said of the flavourful donation. “We serve approximately 700 meals a day so for us it’s really a gift.”