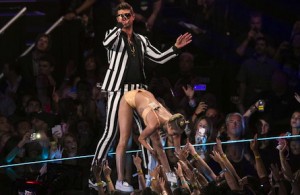 The Students’ Society of McGill University has opted not to ban the song Blurred Lines by Robin Thicke, known for its refrain, “I know you want it.” The song has long been criticized for lyrics that some say encourage and trivialize sexual assault.

There were seven votes in favour of the ban, eight opposed and 11 abstentions, according to the McGill Tribune. The motion was put forward by student Sarah Southey, who said the lyrics could trigger bad memories for assault victims when played at the campus bar. Brian Farnan, a SSMU vice-president, was opposed to the proposed censorship. “This will set a frightening precedent, when we start to ban artistic content in a student building in a university,” he said.

Several student unions in the United Kingdom, including those at the universities of London, Kingston, Edinburgh, Leeds, Derby, West Scotland and Bolton, have banned the song. Durham University’s students voted against a ban after some argued it would trivialize feminism.