Odds are picking up

With more women at most schools, young men have never had so many dates 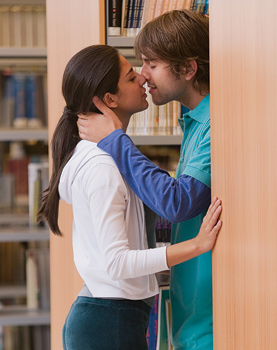 “If you strike out everywhere else, just come to the Mount,” says Cody Brown, a congenial second-year student at Mount Saint Vincent University in Halifax. The reason is simple: the Mount’s student body is 79 per cent women. “It’s a great ratio,” says the 19-year-old enthusiastically. “A phenomenal ratio.”

Though the Mount is an extreme example, female-dominated campuses are an increasing reality at universities across the country. According to Statistics Canada, 57 per cent of the student body in universities is female. Of the 69 schools Maclean’s surveyed in its 2010 university guide, 24 institutions have a student body that’s over 60 per cent female. And it’s not just Mount Saint Vincent where the females make up more than 70 per cent of the population. It’s the same at NSCAD University and Université Sainte-Anne.

The trend is welcome news for women who want to focus on homework instead of being incessantly courted, and men who like all the attention. But as the female-to-male ratio skews, dating must adapt.

Brown, a clean-cut guy wearing a nondescript outfit of jeans, a white T-shirt and runners, notices “the Mount’s” ratio most on pub nights. “You’re treated like a VIP,” he says, adding that he hasn’t had to buy a drink yet. But the ratio isn’t always as rosy at it seems. The attention has its downsides. Namely, of the Mean Girls high school drama variety. “It’s crazy,” he says, “girls are at each other’s throats.”

For some girls at the Mount, the ratio is actually a blessing. Just ask the students at Birch 1*, the girls-only residence on campus. “It’s more studious,” says residence adviser Melanie Brister, 19, the result of its female-only environment, she explains. Brister says her roommates—many of them religious—think “guys are a distraction.”

Even students from one of the few remaining male-dominated schools, the University of Waterloo, are taking advantage of the growing female presence. Although men still outnumber women 57 to 43, students are turning lemons into lemonade. Matthew Cam, 20, a software engineering student at Waterloo, says one way to overcome the female drought is to choose parties strategically. For example, chemical engineering parties have more girls than software engineering parties. Who knew?

Cam’s software friends say an even better option is to walk over to Wilfrid Laurier University, just a kilometre away, which has plenty of coed revelries. At WLU, the male-female ratio is much more male-friendly, at 61 per cent women.

If there’s a campus where the skewed ratio appears to be overcome, it’s the University of Western Ontario, in London, Ont. (which, at 58 per cent female, is pretty typical). Nevertheless, it has a reputation for parties and the attendant hook-ups. The high-density residences, like the notoriously raunchy 1,250-person Saugeen-Maitland Hall, may be to blame. (There also happen to be four richly furnished bars on campus and at least seven major clubs on nearby Richmond Street.)

One thing is certain, they don’t shy away from sex. Just look at the residence cheers drilled into new students, says Devon Johnson. When the Western alumnus arrived in 2004, she learned the residence cheer that matches their mascot—a rooster. “The guys would go, ‘Who loves the cock?’ and the girls would call back, ‘We love the cock,’ ” says Johnson.

Krystle Ficker, 18, says the residence cheer is still alive. In fact, Western’s reputation precedes it so much that visitors ask her and her friends, “Are your dorms really ‘STI-ridden’?” and, “Do you get laid every night?”

If she gets too tired of all the attention, perhaps she should consider transferring to a place like Mount Saint Vincent, where the boys are few and far between. She may even want to consider living in Birch 5.

*The all-girls residence at Mount Saint Vincent University was incorrectly identified as Birch 5 in a previous version of this article.