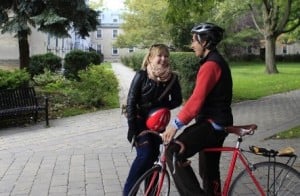 The University of Ottawa’s English newspaper thinks French-speaking Ontarians deserve “a university to call their own,” because, they argue, “Franco-Ontarians are plenty in number but hugely underrepresented at universities.”

They quote Geneviève Latour, a student and co-president of the Regroupement étudiant franco-ontarien, an advocacy group. “It’s really a question of having the right to it,” she says.

Oh please. Francophone Ontarians are neither “large in numbers” nor “underrepresented.” In fact, they’re quite well-served already. Ontario does not need another francophone university.

The Fulcrum and Latour should check out the study on francophone post-secondary participation published this week by the Higher Education Quality Council of Ontario. It says that students from French-language school boards are slightly more likely to attend university than average.

That’s not surprising considering the number of options available to study in English or French.

I visited Laurentian University in Sudbury, Ont., one two bilingual schools in the province, last winter while researching for the Maclean’s Guide to Canadian Universities. Francophone students told me they were pleased with the number of options, 38 fully-French programs and growing.

At the University of Ottawa, the world’s biggest bilingual university, students occasionally complain about not being served well enough in French, but, then again, the English students complain that they aren’t served well enough in English. It’s hard to argue there aren’t enough options at a place where 31 per cent of students are francophone and I think it’s safe to assume there isn’t exactly an overwhelming demand for the French programs they do have or else the university wouldn’t have made the drastic decision to decrease tuition by $10,000 for only French international students.

On top of that, there’s already a French-only university, Hearst, with three northern campuses and 800 students. There are also French-only colleges like Collège Boréal, with several campuses and La Cité collégiale in Ottawa, and Glendon, the bilingual faculty of York University in Toronto.

The HEQCO report concludes that, while there’s plenty of access overall, there isn’t enough in one particular region: western Ontario. I disagree, considering the same report says 93 per cent of francophones live in eastern, northeastern or central Ontario and the province already offers free money to francophone students who travel more than 80 kilometers to study in French.

Not only are the options plentiful but, like it or not, French is a language of declining importance. In the 2006 Census, 2.4% of Ontarians spoke primarily French at home. That dropped to 2.2% in 2011, according to the National Household Survey. Chinese languages, meanwhile, were primarily spoken by 3.2% in 2006 and 3.8% in 2011. Perhaps Chinese speakers should get a university?

Francophones will argue that French is special because it’s an “official language” and is therefore required to do business with the government, but the federal government isn’t hiring much lately and political power is shifting west where most people couldn’t care less about French.

The truth is, the franco-ontarien minority has long received more than their share of tax money to ensure access to education in their mother tongue and the numbers show they’re getting it. They should be happy their fellow taxpayers have been so generous and stop demanding more.