Point the Finger: In praise of priceless conspiracy theories

Thanks for the smiles.

Today is Barack Obama’s birthday. Tell most people and they’ll give you a cockeyed stare.

“Why are you telling me this?”

But tell a group of right wing theorists in the United States and you might get an inflamed response.

“Obama wasn’t actually born in America. His documents are bogus. He shouldn’t be president.”

Say hello to the “Birthers,” a group of fringe fanatics who reject the legitimacy of the Obama presidency. Though the details of the conspiracy vary depending on where you look, the underlying premise stays the same: Obama was born in Kenya. His presidency is illegal. 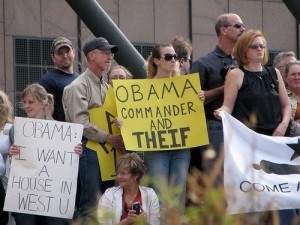 So, in humble appreciation for this and other perpetual sources of constant amusement, I present:

“Point the Finger: In praise of priceless conspiracy theories.”

To the “Truthers,” who think 9/11 was an inside job, thanks for Loose Change and the George Bush/devil bobblehead. And I know, they did Pearl Harbor too… they did Pearl Harbor too. To those who supported the Toronto green bin initiative, I believe you; one day our garbage really will be separated. To those who deny global warming, yes I see your sweater and yes, I know it’s August. (But could you turn off your stalling vehicle anyway?) To the space haters, thanks for letting me know NASA faked the moon landing. Somehow, that makes me feel better about their $17 billion annual budget; I am forever indebted to you. To the brave men and women who tell me religion will control my mind, and to the other brave men and women who tell me atheism will rot my soul, thanks for sharing your wisdom. And finally, to the Telegraph-Journal for Wafergate, and Fox News for the Obama-Dijon mustard break, and concerned citizens everywhere for constantly reminding me that Starbucks is the source of all evil. And, of course, to the Birthers: thanks for making my August 4 so very special. With you on the forefront of my mind, I praise the most priceless of conspiracy theories.