Professors get some bizarre gifts 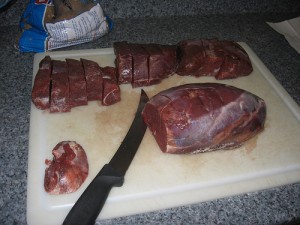 The other day, in the hallway outside my door, something unusual happened: a student offered his history professor a large amount of venison. The student had recently taken up bow-hunting and had, apparently, become pretty good at it, because he had plenty of deer meat to give away.

The prof graciously turned it down.

That particular gift may have been odd,  but it’s not at all uncommon for students to offer gifts. I have a mug adorned with Shakespearean insults on my desk to attest to that fact, and a hand-carved Malaysian pencil in my drawer as further evidence. Student gifts range from the tasteful and understated—I once received a lovely metal bookmark with my initials engraved on it—to the downright bizarre.

A colleague (the same one who turned down the venison) reports being given, among other things, a gavel, a Satan bobble-head, and the right to consider himself some kind of Viking prince. One instructor told me ruefully that all her students had ever given her were “headaches and angst.”

But like so many things at universities, giving gifts can be fraught with implications that students might not see at first. I have deer meat, the thinking goes, and my prof might like deer meat, so what’s the issue? And if your professor has been especially kind or helpful or inspiring to you, the urge to give some token of thanks can be especially strong. But gifts can be inappropriate.

So here are a few quick guidelines to help students make sense of it all.

1. Students are never under any obligation to give professors gifts. They are paid to help you, and for the most part, enjoy helping you, and neither expect nor require any additional compensation.

2. If you are going to get your prof a token of your thanks, avoid giving gifts during the academic year. Giving a professor a gift, no matter how well-meaning, while you are enrolled in that prof’s class may make your professor uncomfortable since they don’t want to favour any particular student or even give the impression that they might. If the gift is very small—say a pencil— it likely won’t be an issue (nobody expects anyone to be swayed by a pencil).

3. The best time to give a professor a gift is after graduation. After grades have been turned in, and the letters of recommendation have been written,  there is no danger of influencing or appearing to influence decisions made about your grades. Still, keep it small. While it has become common in some countries for students to present lavish gifts to teachers and professors, doing so in Canada is more likely to embarrass than impress.

If you’re still unsure, consider a hand-written card or note, explaining how the professor inspired you or influenced you for the better. While profs do appreciate appropriate gifts, they love to know how much they have meant to you. Trust me, your prof will still have that letter long after a bottle of wine has been drained,  the bookmark lost, and the venison eaten.