Professors work for you

A call to take back your education 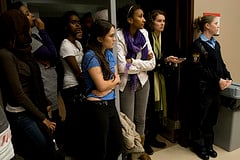 As reported by Dean Tester, my OnCampus colleague, Hassan Diab was recently hired for, then fired from, a summer position teaching introductory sociology at Carleton University in Ottawa. Diab is accused in the 1980 bombing of a Paris synagogue that killed four and injured dozens more. He is under virtual house arrest and faces an extradition hearing in January.

Carleton released a statement Tuesday saying their decision to remove Diab from the position was “in the interest of providing its students with a stable, productive academic environment that is conducive to learning.”

I’m not going to debate the integrity of their decision. I’ll let you assume what side I’m on. Here’s what’s of more immediate importance to me:

Carleton has faced criticism from the Canadian Association of University Teachers for removing Diab from the post. James Turk, the association’s executive director, chastised the university saying, “They did this solely because of external pressure. It’s an abdication of the responsibility of universities to be insulated from these kinds of pressures.

Now, obviously I’m incredibly naïve and misinformed, but I was under the impression that students, you know, pay for their university education.

Oops, I’m sorry; am I going too fast? I’ll back up a bit. You see, “money” is exchanged for “goods” and “services.” With said exchange comes an expectation of the standard and/or quality of benefits received. So, to be specific, university tuition is paid with the expectation of receiving a level of post-secondary education befitting certain quantitative and qualitative standards.

To use a different, kindergarten-level example: if I pay a barber to cut my hair, I’m allowed to tell him how short. If I give money to a restaurant in exchange for a meal, I expect the cook not to spit in my food. And if I pay a university $5k+ a year for an education, I expect administrators to consider my opinion when I give my two cents about their hiring decisions. They don’t have to take my opinion—just consider it.

With that idea in mind, Turk’s expectation that universities be “insulated” from “external pressures” is not only misguided, but simply put, it’s unreasonable. Whether directly or through representative organizations, students should have their voices heard.

So, in my opinion, it is precisely the responsibility of universities to listen to so-called “external pressures,” especially when those burdensome letter-writers are the ones signing the cheques. Anyone who thinks otherwise should tell those thousands of students gearing up for their school year campaigns to put their paints and posters away.

Here’s another unsettling example—a personal anecdote, for a change. Last semester I was in an English lecture when my professor stopped mid-sentence to shoot a glare at one student in the 100-person theatre.

“What are you doing?” she asked, as the rest of us looked on.

“Do you come to my class to do crosswords?”

“Either put it away or leave.”

Forever etched in my mind, I can’t decide what was more surprising; the fact that the professor actually had the gall to chew out the boy, or that I was somehow able to keep my mouth shut. If the student was disturbing the class, that would be one thing, but he was simply and quietly (albeit, rudely) not paying attention. So what? He was paying her to teach the class. If he wanted to waste his money, that was his choice.

We’re not in high school anymore. We’re coughing up the funds, so we rightfully have a say in our education. We can choose to exercise it directly or through more vocal organizations. Either way, I say lay it on. Let Turk and the crossword haters squirm.