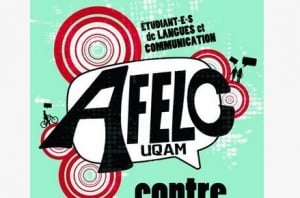 A student group is distancing itself from a pamphlet bearing its logo that called on students to commit acts of vandalism, kidnapping and sabotage to fight against tuition hikes.

The pamphlet, which circulated last week, bears the logo of AFELC, which represents humanities and communications students at the University of Quebec at Montreal (UQAM).

In a post on the group’s Facebook page, association executives claim they first heard about the pamphlet when they were contacted by reporters. They say that the pamphlet appears to have been created by people involved with the association’s “mobilization committee,” which is an informal wing that fights tuition increases.

Coordinator Philippe Bellemare told the Journal de Montréal that the group is peaceful.

Line Beauchamp, the provincial minister in charge of higher education, denounced the pamphlet.

The pamphlet says (in French) that students should “hit very hard—harder than the student movement has ever hit before: kidnapping, sabotage and destruction of institutional equipment.”

The authors admit that “not everyone would be comfortable with this level of extremism.”

Unsurprisingly, numerous students have posted on the association’s Facebook page condemning the pamphlet and demanding an explanation. It has also inspired a quick meme.

Montréal Campus reports that both university and Montreal police are investigating.