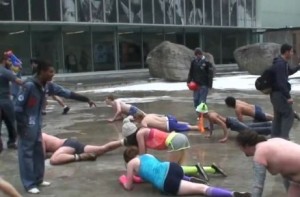 The Ryerson Engineering Student Society was caught with its pants down last week, and president Sheldon Levy isn’t happy. In a statement, Levy described a YouTube video shot by a concerned passersby depicting underwear-clad engineering frosh week leader hopefuls crawling across the slushy campus as a “departure from dignity” and contrary to the university’s principles. In the video, the hopefuls are screamed at as they crawl across the man-made pond in the centre of campus known as Lake Devo. At one point, a male student spanks a crawling female.

Levy’s comments were met with predictable backlash accusing Ryerson of being the fun police, but he’s right. Events like this aren’t “harmless” or “fun.” Incidents of public humiliation never are. When I was a student at Ryerson, I wouldn’t cut across Lake Devo wearing a sturdy pair of shoes. Watching students in the video drag their limbs through the grimy slush just made me shiver.

Raucous initiation rites are common at universities, particularly amongst engineering students, but it’s time to examine why we cling to activities like icy underwear jamborees to bring people together. The Ryerson ritual was voluntary, but it’s naïve to think all students will summon their inner Nancy Reagan and just say no. Initiation rituals are steeped in the pressure to gain acceptance.

The university said no one who participated in the romp complained, but it also wasn’t very inclusive: RESS president Rose Ghamari told The Toronto Star only about half of the 100 students who applied to be frosh week leaders participated. I can’t blame those who abstained: one student’s shirtless conga line fantasy may be another’s gym class flashback nightmare.

The event is in its seventh year and has been captured on YouTube before, so it’s hard to say why this year’s video garnered so much attention. Clever editing? This spring’s crummy weather?

It was certainly tame compared to horror stories of booze-fueled injuries and deaths related to campus hazing, and a parade of scantily clad university students isn’t cause for moral outrage, but as Ontario Premier Kathleen Wynne put it, these sorts of activities are “outdated.”

We aren’t living in a mid-sized college town in the 1970s with nothing to do. Toronto is jam-packed with meaningful opportunities for team building and exploration beyond the frozen floor of Lake Devo. How about scavenger hunts, sporting events, concerts, and yes, climbing the CN Tower.

RESS has since apologized, and Ryerson issued a statement saying the society won’t be punished.

With the university’s position very clear, the engineering society should take this opportunity to pick apart their frosh team building plan and build a better one. Surely there’s room for silliness without crawling and spanking. Engineers are creative, and a city like Toronto has way more options on offer that could help students bond, even if they require them to wear pants.