Scientists narrow in on hunt for 'God particle' 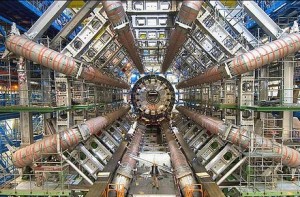 Two teams of nearly 3,000 scientists from around the world, including researchers from 10 Canadian universities, announced this week a new milestone in the hunt for the Higgs boson, a particle that explains the existence of mass.

Scientists at the CERN Physics Research Centre in Geneva, Switzerland presented evidence on Dec. 13 pointing to the existence of the Higgs boson, coined the “God particle” by the American Nobel Prize-winning physicist Leon Lederman.

The teams worked independently for 21 months inside the Large Hadron Collider, the world’s largest particle accelerator, to re-create the conditions at the time of the creation of the universe—the Big Bang. The experiments produced the same results: scientists determined that the Higgs boson has a mass between 128 and 525 gigaelectron volts, in the lower regions of the energy field.

The researchers are quick to point out that the news another step in the process, not a definitive discovery. Still, University of Toronto physicist Robert Orr tells the Toronto Star we owe a lot to the elusive Higgs boson: “The whole world we live in is based on the science of electromagnetism. Our whole society has evolved from that: iPads, cameras, lights, computers.”