What this town needs is a Magic Bus 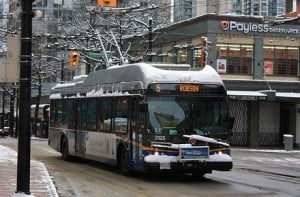 Drunken students from the University of Sherbrooke have caused so much trouble that bus drivers say they will no longer pick them up.

It’s a common problem in university towns: hordes of inexperienced drinkers hobbling onto buses late at night with unhealthy amounts of vodka sodas sloshing around inside leading to vandalism, violence, public displays of affection and spilled Chinese take-out noodles.

This policy may, however, be a first. Sherbrooke’s Student Federation is calling it discriminatory. It’s hard to argue with that but they’d be wise to drop the fight and do what college governments at the University of Guelph did many years ago in response to similar problems: create a magic bus.

Every night, until as late as 3:30 a.m. on Thursdays to Saturdays, The Magic Bus shows up near downtown bars and then transports drunken students to a few stops in the most student-populated areas of town. The free service is funded by a student levy of $1.88, according to the website.

In my days as Guelph undergraduate (2003 to 2008), I remember sober volunteers at the magic bus stop enforcing rules (no Chinese take-out) and watching for people who needed extra help. The ride was loud and smelly but it kept students—and drivers— safe. It was worth every cent.