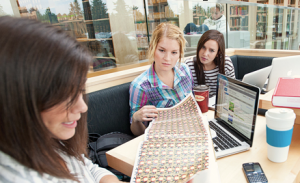 The library at Nipissing. By Cole Garside.

From the Maclean’s Student Issue, on sale now.

It’s the time of year when twelfth graders realize that they need to choose a university—and soon. Let the road trips begin.

But if their travels take them to the libraries at the University of Calgary or Guelph, they may stumble over students sitting on the floors. Study space is in short supply.

If they tour residences at Dalhousie or McGill University, they may find themselves in a converted hotel or see bunks stacked in former study spaces. Each school has had room shortages in recent years.

And if the tourists crash classes at Western or Toronto, they may rethink the whole university thing after they see students shouting to professors in 900-seat halls.

Then again, they may just accept the noisy libraries, overstuffed residences and stadium seating. What else would they expect after the population of Canada’s universities grew by 50 per cent in the past 15 years?

Not every campus has been so squeezed. If applicants tour the new library at Nipissing University in North Bay, Ont., they’ll walk past students sprawled on plush benches, deep in concentration under natural light.

If they tour either of Laurentian University’s new residences on its Sudbury, Ont., campus, they’ll find enough space to accommodate not just all first-years who apply, but many second- and third-year students too.

If they check out the pristine classrooms at the University of Northern British Columbia (UNBC) in Prince George, they’ll see most classes have fewer than 25 students.

It’s not that Canada’s small northern campuses haven’t grown too. The difference is these campuses were so small they had plenty of room to grow. A decade ago, they couldn’t afford some basic amenities. But as the big southern schools show their age, Canada’s northern schools have arrived.

“A lot of universities are crowded and suffering from huge deferred maintenance,” says Ken Steele, a post-secondary marketing guru with consultancy Academica Group. “They have a lot of older infrastructure, and students are noticing.”

There is, of course, such a thing as being too new. In 2002, Nipissing was 10 years old and students joked that it was just like a high school; with a population of 1,960 full-time students and a one-building campus of brown brick and lockers, it felt like one. A school that size couldn’t afford much. But as the school approaches 4,000 full-time students, it’s got enough per-student government funding to afford its $25-million library, a new sports facility, and double the amount of lab space that it started with.

Lesley Lovett-Doust, Nipissing’s president, says the institution’s relative youth has also allowed it to leapfrog over its peers. “The old schools are retrofitting old libraries, sending tonnes of books into storage to try to open up their libraries for collaboration,” she says. “We skipped that phase.”

Ashley Ryan, a 2008 science graduate, now works as a lab technologist at Nipissing. “Even in the past four years, I’ve noticed a huge change,” she says. Recently, the school purchased an electron microscope, a huge benefit for Ryan, who took up microscope photography as a hobby. It also helps young students, because Nipissing is small enough that they have access to the equipment.

It’s not just per-student funding that has helped these schools flourish. Philanthropists now see them as a good bet too. Nipissing received a $15-million donation in 2010. Laurentian, which has added $140 million in new buildings since 2005, attracted a $10-million gift for its engineering school in late 2011.

“There aren’t a lot of $10-million-plus donations out there,” says Steele, the marketer. “Ten million dollars added to a smaller institution makes a bigger difference than at a larger institution.”

Dominic Giroux, the president of Laurentian, agrees. Big urban schools pay hefty prices for land. Some, like the University of Ottawa, struggle to find land at all. Giroux has plenty at his disposal. “That’s just one of the advantages of having a 750-acre campus,” he says.

When he was offered the job in 2000, he was taken by the physical beauty of the then-six-year-old campus. His peers at McMaster and Western warned him against working at an unproven institution. But now, 18 years after its founding, UNBC is proven: it’s No. 1 in total research dollars among primarily undergraduate schools in the 2011 Maclean’s rankings.

As Ken Steele puts it, “the upstarts now have the advantage.”