Feral rabbits on campus will be euthanized or sterilized 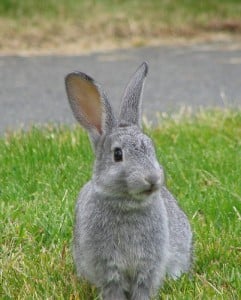 The University of Victoria announced plans on Monday to deal with the 1,400 rabbits that have taken over the campus.

The original plan was to trap and euthanize the rabbits to cut down the population, but the new agenda includes a sterilization option.  A contractor will set traps around campus and rabbits will either be euthanized or sterilized and relocated. The sterilized rabbits can be adopted by applying for a permit from the Ministry of Environment.

Although, ideally, I’d like to see no rabbits euthanized, it’s good to hear that UVic is trying out other options. With any luck, the Coalition for the Ethical Treatment of UVic Rabbits can recognize this announcement as a positive step forward. The focus can now (hopefully) be shifted to finding accommodation.

UVic will keep just 200 feral rabbits on campus, with 50 in each “rabbit control” quadrant.

FILED UNDER: Coalition for the Ethical Treatment of UVic Rabbits rabbits University of Victoria uvic