Student elections are underway across the country. Increasingly, student politicians are turning to social media platforms such as Facebook, Twitter and YouTube to get their messages out. On top of that, in an attempt to attract more students to polling stations, those who administer campus elections have also taken advantage of these tools. Here are five innovative examples from 2013:

1. YouTube music video. At Western University, Ashley McGuire, Blake Barkley and Jordan Sojnocki teamed up to run for the University Students’ Council executive. Along with a sleek campaign website and a detailed platform, the trio created a music video and uploaded it to YouTube. What’s impressive is that, since posting it on Jan. 28, the video has received 10,500 views. However, members of Team McGuire were not successful in their election bids.

2. iPhone app. Team Whelan (Patrick Whelan, Amir Eftekharpour and Sam Krishnapillai) ran against Ashley McGuire’s team at Western University. This team’s electoral victories may have been aided by their iPhone app. I tested it on my iPod Touch 4G. To my surprise, it ran flawlessly. Under the Get Involved tab, users are able to join the team’s mailing list, suggest an idea and become a volunteer. The team’s platform is also easily accessible via the app. 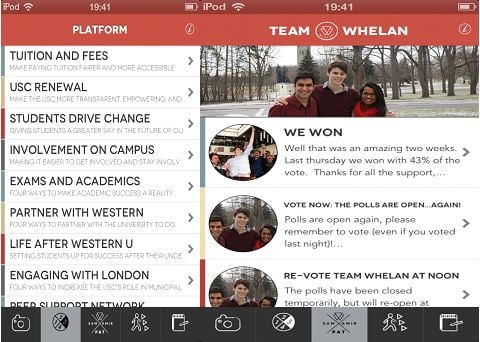 3. The QR Code. When campus election season comes along, buildings are plastered with posters. So how are student politicians attracting students to their websites? Simple! They’re incorporating Quick Response (QR) codes to their posters that make it easy to access their sites without even having to type in a URL. Apps such as ScanLife, QR Code Scanner and Optiscan use one’s phone camera to scan a two-dimensional barcode. Once scanned, the app brings users to the site. Sarah Lavers, Kelsey Marr and Anastasia Smallwood all ran for president in the recent University of Prince Edward Island Student Union election and incorporated QR codes. Smallwood came first.* 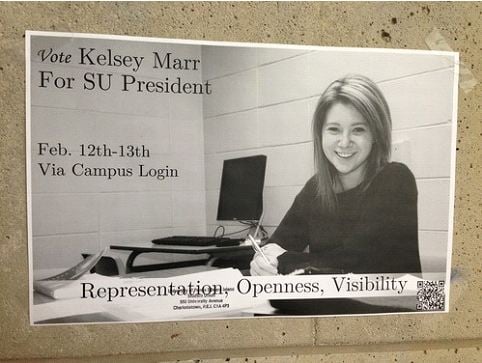 4. Blogs. Platforms such as Blogger and WordPress allow users to create blogs free of charge. Student politicians have seized the opportunity to communicate directly with their electorates. Candidates like Caroline Wong, who ran for and won the position of president in the University of British Columbia Alma Mater Society elections, used WordPress to create her campaign website. 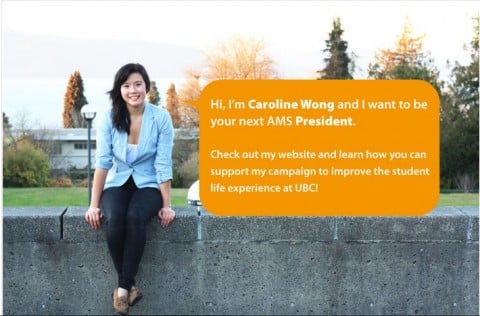 5. Video streaming and recording. When organizing all-candidate debates, election officials will never accommodate every student’s schedule. In an attempt to make these debates as accessible as possible, election officials have taken to live streaming and/or filming the debates and posting the videos to YouTube. Free video live streaming websites such as USTREAMand Livestream allow anybody with a video camera or an iPhone to stream free of charge. The Argosy, Mount Alison University’s student newspaper, posted videos of candidate speeches to its YouTube account.

Brandon Clim studies political science at the University of Ottawa. Follow him @climbrandon.

*Due to an error in editing, this post incorrectly stated that Lavers came first and Marr came second in the UPEISU election. In fact, Smallwood came first, followed by Lavers and Marr.