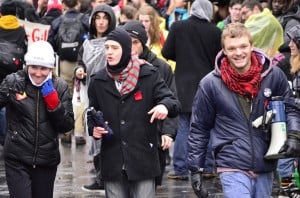 Quebec student group CLASSE expects between 10,000 and 20,000 people to take to the streets of Montreal and Quebec City on Friday to protest the provincial government’s plans to raise tuition.

“We think it’s important to remind the Charest government the crisis is not over, and we’ll continue to be in the streets, because we are still against the tuition hike and this is still our fight,” interim CLASSE spokesperson Hugo Bonin told the CBC. The nightly protests in the province have recently dwindled in size, something the CLASSE blames on students taking summer jobs and fatigue after months of demonstrations, some of which turned violent.

The CBC is reporting that CLASSE organizers in Montreal have not shared the route of their demonstration with police, contravening Bill 78 (recently criticized by the UN), which makes mandatory the sharing of protest plans with security forces. The demonstration route in Quebec City, however, has been given to police. The protests in Montreal are slated to commence at 2 p.m.

Update (4 p.m.): Thousands of people are marching through the streets of Montreal. According to the Gazette, initial projections being passed around—not totally reliable—put the number at around 100,000.