Many just pass by homelessness fundraiser at U. Alberta 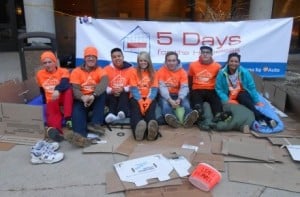 Every night, around 33,000 homeless Canadians are forced to sleep on the streets, according to the non-profit Covenant House. For five days this week, students at the University of Alberta and other universities all over Canada are joining them to raise awareness of the issue.

A few years ago, a group of business students studying at the University of Alberta started 5 Days for the Homeless, a campaign whose name says it all. While sleeping outside on campus grounds with nothing more than sleeping bags on cardboard boxes, they accept charitable donations for non-profit organizations. Up to this year, they’ve raised nearly $100,000.

But what drives these volunteers to go without warm beds for almost a week, sleeping in temperatures that could dip as low as minus-20 in Edmonton?

Fourth-year Faculty of Business student Maryna Vysotski said she’s participating to raise money and awareness for Youth Empowerment and Support Services (YESS), a local non-profit that helps those aged 16 to 18 when they are no longer eligible for other crisis services. “Kids in that age group are in a vulnerable time in their lives and they really need that support,” she says.

Keeping this charity in mind also helps Vysotski deal with the challenges of sleeping outside in the middle of a perpetually noisy environment. “Before the first night, we didn’t realize how much sound there is on campus at night,” she says. A flickering light above their camp frequently made loud sounds in the night, as did nearby traffic. These distractions kept the majority of the group awake the first night, making it very difficult for them to focus in their classes the next day. Vysotski says it’s mandatory that the volunteers attend all of their classes, despite their restless nights.

“We don’t want any privilege because of this,” she says, adding many have much worse problems.

However challenging the nights are, Vysotski insists they’re nothing compared to the lack of reaction from those passing by their camp. “People don’t even notice us. We’re wearing bright orange t-shirts and hats, but they still avoid us,” she says. “It really changes your perspective of humanity. It’s almost like we, as a society, are trained to ignore homeless people.”

But Vysotski says that the few reactions they do get make the campaign worthwhile. “Some people are very encouraging,” she says, “so we still get tons of praise.”

And hopefully plenty of money. 5 Days for the Homeless seeks to raise $30,000 by Friday.

FILED UNDER: 5 Days for the Homeless charity homelessness University of Alberta