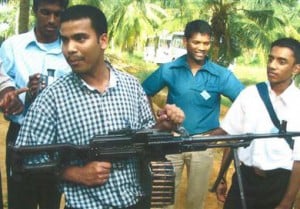 According to the National Post, a former president of the Canadian Tamil Students Association has been caught on film both handling and firing guns at a Tamil Tigers camp.

The photos feature Sathajhan Sarachandran, who is currently awaiting sentencing on terrorism charges in the United States, holding a machine gun and aiming a rifle as a group of men stand behind him.

In another photo, Sarachandran is aboard a ship that is carrying the flag of the rebels’ navy, the Sea Tigers.

RCMP officers apparently found the photos during a search of Sarachandran’s Scarborough home. The raid was conducted at the request of the FBI Joint Terrorism Task Force, which was investigating his involvement in a rebel arms smuggling ring.

The 29-year-old computer science student has pleaded guilty to supporting terrorism and conspiracy to buy surface-to-air missiles for the rebels, also known as the Liberation Tigers of Tamil Eelam. He is facing a possible life sentence at his Oct. 6 court date.