Is the editorial board at the National Post made up of a bunch of sexist, “ill-informed jackasses”? That is what is being argued from the sidelines of social media—blogs, Twitter, Facebook, [insert latest online soapbox here].

The chorus of anger is in response to Tuesday’s editorial in the Post called “Women Studies is Still With Us.” The column begins by outlining the news element: there have been reports that women studies programs are disappearing from Canadian campuses, they say. This is presumably a retort to the Toronto Star columnist Catherine Porter’s lament that Queen’s University is changing the name of their women studies program to “gender studies.” 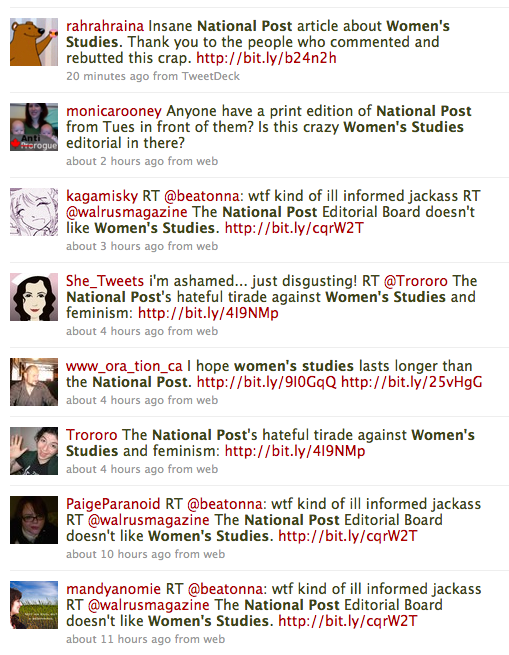 The Post goes on to play the skeptic, but accomplishes sounding more like a self-proclaimed conspiracy theorist revealing what was on the front page of yesterday’s paper: “We would wave good-bye without shedding a tear, but we are pretty sure these angry, divisive and dubious programs are simply being renamed to make them appear less controversial.”

Uh… duh. As Maclean’s OnCampus reported last weekend, and Porter herself acknowledges, no one is claiming these classes and programs are gone, only that the name is changing. Porter is annoyed, apparently because of her nostalgic attachment to the resulting “empowerment” of seeing the word “woman” in the course calendar of her university days (which is sentimental nonsense, if you ask me). OnCampus’ Robyn Urback argues more rationally when she notes that the change to “gender studies” reflects the contemporary study of women’s role in society. “To properly understand the role of women in society you have to understand the role of men,” she writes. Furthermore, by depoliticizing the program by removing the word “women” surely the subject of study can move on to a more nuanced study of gender in society.

So, does the change make things less controversial? Probably. Moving the subject of women studies away from its traditional “man-hating” subject matter–if you will–you’d think would please the Post. But, nope, the editorial board sees the change as a manipulative way of masking women studies academics’ true intentions: to crush all things good in our society.

The Post then argues that women studies programs are downright evil. (I don’t think that’s an exaggeration.) Radical feminism at the core of these programs, they write, has wreaked havoc on families, labour law, court systems, constitutional freedoms and “even the ordinary relations between men and women.” According to the Post, women studies programs are responsible for the entirety of what feminism got wrong: they are to blame for ill-advised affirmative action in hiring, for convincing young women that all men are victimizers, for divorced men who find themselves unfairly blocked access to their children, for systematic unfairness in the Supreme Court, for increasing taxes with frivolous programs like universal child-care (because child-care is a women’s issue, right? sigh), and for insisting that men shouldn’t try to write novels from a woman’s perspective. These crazy women studies professors have gone so far as to argue that “all heterosexual sex is oppression because its ‘penetrative nature’ amounts to ‘occupation.’” And the result of all of these sins? “Executives, judges and university students must now sit through mandatory diversity training.” Boo hoo.

Although the Post doesn’t go to the trouble of letting the reader know when and at which university these sins were committed nor who said the things they quote in their editorial, I don’t doubt that each of these transgressions occurred at some point in history on some university campus. Nevertheless, it’s a cheap shot to seek out the most extreme of feminist arguments to make the case for why women studies should be extinct. Any movement will have its extremists—in this case, those who argue that sex is, by definition, “occupation”—and a rational person would look past those and listen to the majority in the middle.

Although I’m female, I don’t call myself a feminist; I believe that most of the work on that front is done and I feel alienated by extremists who continue to decry the inherent chauvinism at the basis of our society. Nevertheless, if women studies are to blame for all of the bad that resulted from feminism, as the Post would have you believe, then we should also applaud them for feminism’s accomplishments, which far outnumber the downsides. No progress in society happens without some steps backwards.

Even if equality has come a far way in our society, there continues to be a role for women’s studies, if not in leading the feminist movement, then in the study of its history. Only an ignorant person would look at our country and see perfect equality and access to achievement, and only in paying tribute to the inequalities of the past will we remember how far we’ve come and why it is important.

Unfortunately, the Post’s editorial accomplishes the opposite of its intention. Instead of making a compelling argument for why women studies programs should be a thing of the past, it only demonstrates why they are essential to our future.