The needle and the damage(not) done

After scientific study linking autism to vaccines turned out to be a fraud, belief persists 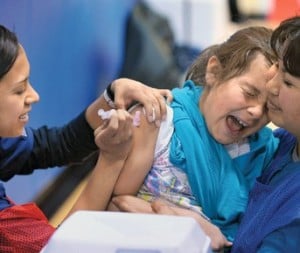 In 1721, after New England Puritan preacher Cotton Mather had started an inoculation program—the ancestor of today’s disease-preventing vaccines—to combat a raging smallpox epidemic that eventually killed 800 Bostonians, someone firebombed his home. “Cotton Mather, you dog, dam [sic] you,” ran a note that accompanied the lit grenade tossed through his window, “I’l [sic] inoculate you with this, with a Pox to you.” There are two good reasons for Seth Mnookin to include the incident in The Panic Virus, his riveting account of the rise of the popular—but scientifically baseless—belief that vaccinations cause autism. Mather’s ordeal demonstrates both the surprisingly ancient pedigree of humanity’s best weapons against its worst enemies (smallpox regularly killed up to 400,000 Europeans a year in the 18th century), and that the counterintuitive idea of deliberately infecting ourselves—or worse, our infant children—with disease has always creeped us out.

That instinctive repulsion is one of the root factors in the long and bitter controversy over the causes of a neurological disorder, usually diagnosed in childhood, that can physically exhaust, financially drain and emotionally devastate families. It is now known that autism and the related conditions grouped together as autism spectrum disorder are physical disorders, meaning that the social impairment aspect—serious language difficulties, avoidance of eye contact and lack of interest in others—is no longer blamed, as it once was, on uncaring “refrigerator parents” who were reaping what they had sown. But what does cause ASD remains unknown, although a genetic “component” is clearly involved. Thus the feeling that ASD is a poisoned chalice parents have brought to their children—”What, after all,” remarks Mnookin in an interview, “is more you, than your genes?”—still provokes guilt, anger and a burning desire to find an outside agent.

No such agent could be more intuitively obvious than vaccines. Beyond their ancient emotional baggage, vaccinations are now given to very young children often within weeks—even days—of the ages at which many autistic kids first display symptoms. And from the1990s onward, both the number of vaccines administered and the incidence of ASD diagnoses have increased. Autism was once thought to affect four or five people in 10,000; today one in 280 girls and one in 70 boys is diagnosed with ASD, for an overall rate of one in 110 children. Intuition is further reinforced by the usual suspects Mnookin fingers: the Internet echo chamber that allows partisans to filter out contrary opinions, and the media’s casual standards of balance, easily satisfied with one source providing evidence-based (if uncertain) science and another offering passionate certainty and compelling stories.

All those factors mean that Andrew Wakefield was less a cause than a trigger in bringing the supposed vaccine-autism link to prominence, even if the British doctor’s 1998 paper in the prestigious medical journal Lancet—recently exposed as an exercise in not just shoddy science but flat-out fraud—gave the theory what scientific gloss it had. Which was never very much, even before Wakefield was exposed: study after study has failed to unearth any evidence for the link.

Yet vaccination rates have continued to drop and 200 California schools are now entering probable disease outbreak situations. One, Ocean Charter School in Del Ray, where half of all kindergartners since 2007 have not been vaccinated, is an epidemic waiting to happen. Ten children died of whooping cough in California last year, part of a state epidemic of 4,000 cases, a rate not seen since the vaccine was introduced in 1955.

The anti-vaccine activists are not likely to abandon the cause any time soon—many, in fact, see Wakefield as more persecuted than disgraced—at least not before there is progress in finding the real cause of ASD. And, more importantly, why its incidence is rising. Better diagnoses explain much of the increase, but not all. An unknown environmental factor is somehow involved in triggering the genetic component, as Mnookin readily admits. “It’s just that it’s not vaccines.”

Related: The problem with science

To understand science, you need to think like a scientist