The heroism of Al-Khabaz, Swartz & the Maple Spring 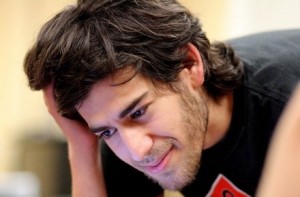 In Timothy Findley’s The Wars, a young officer, Robert Ross, defies orders and releases horses confined in a barn. It is WW1 and he is in an area of France being shelled by Germans. Releasing them is a way of saving them as the structure is an obvious target. Ross is an officer with the Canadian Field Artillery and it’s his love of animals and justice that motivates him. It’s also his last act before desertion.

Findley’s assertion was that Ross’ actions were heroic in context. His liberation of the horses is cast against the shadowy psychopathy of WW1, a psychopathy so hideous it kept high-ranking military men from touring the front. Had they done so, the carnage of the Somme, Ypres and Passchendaele might not have materialized. More soldiers, from all forces involved, might have made it home.

The Wars is timely because it seems conventional ideas about heroism are atomizing before our eyes. More relativistic ways of seeing things, perhaps brought on by the pervasive use of the internet, are transporting us to a world where the bad guys are everywhere and they’re usually in charge. It’s created some odd bedfellows and even odder instances of cross-pollination. The Arab Spring, a political uprising with some very discernible causes, was replicated in Quebec by the Maple Spring, a student uprising that had a lot of us here scratching our heads. Many were puzzled by the students’ adoption of a name whose power was clear but whose basis for comparison was wildly inaccurate.

Social media has played an important role in much of the world’s activism, allowing individuals to participate in ways not possible before. However, some would argue that not all politically motivated crowd-sourcing is warranted. Is it ever wrong to get involved?

One by-product of being pitched into battle is that one develops a heightened sense of vigilance. After a particularly bad experience with an Ontario hospital, my trust in the government was shaken and my ability to trust, in a general sense, was shaken too. So when an ominous thought appeared on my mental horizon, two things happened: a) I accepted it
because I had become willing; and b) I was too battle-fatigued to fight it.

And here it is: some individuals who lay claim to heroism actually create the conditions for it.

Dawson College has come under fire from web enthusiasts over the expulsion of computer science student, Hamed Al-Khabaz. When he discovered a security flaw in Skytech’s Omnivox system, the college was initially grateful. Unfortunately he kept entering the system to see if the problem had been fixed. Finally he was given two legal orders to stop.

He didn’t and eventually he was expelled. He went to the media and the non-disclosure agreement he signed came to light. Although the agreement was made for security purposes—to contain the breach—-many interpreted
it as Dawson’s attempt to silence him and Al-Khabaz was seen as the victim, as David to the college’s Goliath.

I saw it differently and here’s how: You are working on your computer. A colleague notices a problem and you try to fix it, but your computer isn’t cooperating. You’re starting to get anxious. But instead of letting you figure it out, your colleague keeps asking you about it every five minutes. You eventually ask him to stop, twice, because his interference
isn’t helping. When you solve the problem, your colleague takes the credit for spotting it, tells everyone you took forever to fix it, and then comments about how ungrateful you are.

That’s not heroic, it’s annoying. But to give Al-Khabaz credit, his timing was canny: he was riding on the wave of anti-institutional feeling triggered by Aaron’s Swartz’s suicide.

Swartz was a prodigy and iconoclast. He left school at 14 and collaborated on developing the RSS feed. Ten years and many projects later, he got into trouble when he planted a laptop inside an MIT computer and downloaded 4.8 million JSTOR documents.

JSTOR is a non-profit organization that indexes and stores journals electronically. The cost of subscriptions, for universities, is significantly lower than other services because JSTOR hosts archival rather than current content. Two of its rivals are profit-earners with substantially higher fees.

So why did Swartz target JSTOR if, as he said, he believed information should be free? It’s odd because of all the indexers out there, JSTOR’s affordability and non-profit status seemed most in line with his thinking. So why steal from an organization that is relatively inoffensive to begin with?

Swartz’ ideology was clear: he considered himself a liberator of information. But unlike Ross in The Wars, his disobedience didn’t stem from genuine suffering and nor did it come from a place of profound understanding. If it had, he might been less reckless and targeted more appropriate offenders. He might not have ended his life when the consequences of his actions, like so many harpies, came clamouring for him. This doesn’t just make his suicide tragic, it makes it terribly so.
His cause, the one he apparently died for, seems sadly flimsier than it ought to be.

Both Swartz and Al-Khabaz could have benefited from the knowledge that we often play out our deepest needs in theatres of our own making and even the most convincing altruism can disguise a profound yearning for acclaim. Our needs can be quite cunning in that regard and it is the job of maturity to bring us into greater contact with our souls, to give us the self-knowledge to deliver us from a life lived in the confines of less mature, less liberated versions of ourselves.

Spending time around activists has been fascinating but difficult; my left-of-centre politics have often been challenged. The gratuitous violence of the student protests and the willingness of some activists to break the law first and justify later, is troubling. The end result is a kind of staged heroism, a heroism that is too calculated, too self-referencing and too cold-blooded to come from the heart.

Irene Ogrizek teaches English literature at Dawson College in Montreal. She offers cultural observations on her blog and is also on Twitter @ireneogrizek.