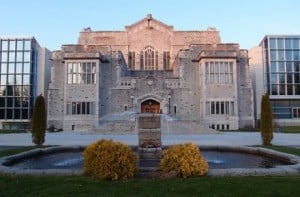 The revelation that American professors make less than our own was a matter of public outrage: Let’s pay the bums less!

It was also a boost to our collective ego. A mere decade ago we wrung our national hands at how our best and brightest always seemed to move south for higher pay. Now, they stay. Phew!

But new annual salary salary statistics by the American Association of University Professors show that there’s more to the story—something we can, in fact, lord over our neighbours.

A quick comparison shows that, in many cases, our profs are better value for money. Teachers at top-tier U.S. schools unload suitcases more cash than those lecturing at our finest institutions—even in cases where the Yanky schools are lower in the Time Higher Education World Rankings.

Take, for example, the University of British Columbia. It’s ranked #22 globally and the median wage for professors of all ranks there was $114,356 in 2011. (Note: all currency is in local dollars.)

UBC students are getting an incredible deal with arts tuition at $4,700 and a world ranking in the Top 25. Duke, with the same ranking, costs some arts students $40,575 in annual tuition.

The same comparison can be made in the east. McGill is ranked #28 globally. Its full professors earned a median wage of $137,485 and assistant professors took home $84,094 last year.

Sure, the cost of living is lower in Montreal than Manhattan, so it’s easy to justify paying professors a bit less. But what a steal McGill is for students who pay $2,200 tuition; it’s $20,000 at NYU!

But wait a minute? How can our professors earn more overall, if they’re earning less at top schools? The answer is greater equality between Canadian institutions. Professors at our lower-ranked schools earn buckets more than those who toil at many U.S. colleges of questionable provenance.

In some cases professors at comparable U.S. public colleges make much less too. Average professor pay at many of the University of Maine’s campuses is around $60,000. At the University of Cape Breton, in a similar rural Atlantic locale, the median is $87,127—one of the lowest in Canada.

The cynic in me says that’s proof CBU should pay their professors less and save us all money. But I don’t think that would be very healthy for students. I think that the reasonably comparable pay between institutions in Canada spreads the talent wider. It makes it more enticing for bright professors from Ontario (like our resident blogger Todd Pettigrew) to move to rural Nova Scotia.

And so there you have it. Our professors are the highest paid in the world, but when compared to U.S. institutions, we seem to be getting good value for money. That makes high professor pay a point of pride, rather than a reason for outrage. Now, if only we could tackle those fat cat pensions.

@JoshDehaas is the editor of Maclean’s On Campus.