This professor teaches geography outside 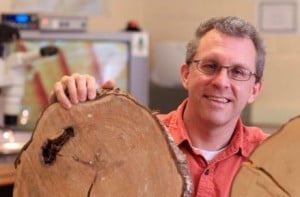 Colin Laroque, a Geography and Environment professor at Mount Allison University, is a 3M National Teaching Fellowship recipient for 2013. Maclean’s On Campus is profiling all 10.

Growing up in inner-city Saskatoon, the outdoors was always a refuge for Colin Laroque. While he witnessed substance abuse and tensions between the First Nations community and police in his day-to-day life, the weekends were an escape. Out on the family farm, Laroque, a Métis, and his elders would track a fox through the snow, go fishing and explore the forest. “That’s how they taught me and that’s how I learned the sights, the smells, the feel for things,” he says.

For a while, he lost sight of what he wanted to do with his life, but eventually decided to go back to school at the University of Victoria. There he studied geography—trees, glaciers and mountains — all the things that reminded him of his childhood.

“It suddenly was hitting a chord with me that felt good,” he says. “That’s where I belonged.”

He earned his PhD and spent a lot of time scoping out the West Coast terrain before making his way to Mount Allison in Sackville, N.B. in 2003.

As a teacher, Laroque draws on his roots as much as possible, encouraging his students to get outside. “Dig a hole in the ground and go and play in the soil and get dirty and that kind of thing, compared to putting a lab coat on and staying inside looking at test tubes.”

One of the highlights of his field course is a trip to Jasper National Park to examine a glacier. It’s a big deal for students, some of whom have never been on an airplane before, he says. “They all have smiles on their faces for a month.”

Former student Sarah Quann describes it as the best learning experience she’s ever had. “It was awesome,” says Quann, who is now doing her master’s in physical geography at Carleton University. “We went for walks, we went to Saskatchewan Glacier and we explored.” Quann appreciates Laroque’s open attitude to self-directed learning. Based on their findings at Jasper, for example, they create a research project of their own choice. “It was really fun to have that kind of control over your education.”

The 3M Fellowship is absolutely well deserved, adds Emma Davis, another grad. “He’s been doing this all along and it’s nice that he was recognized for all of his hard work.”